He measures a whopping 40cm in length and weighed a good 26g. He was found in vegetable patch in Widnes, Cheshire.

The Lumbricus terrestris, named “Dave” by Mr.Paul Ress and his grandson, who found this wormy friend,was studied at the museum before being killed in what staff called “the sad bit of science”.

It is now in a jar and will be “kind of immortal”, the museum said.

Natural History Museum scientist Emma Sherlock said: “I was bowled over by the size of this worm when I opened the plastic box they sent it in.Not only was it really long, it was almost twice as heavy as any other wild earthworm ever seen, weighing the same as a small chocolate bar.Dave is now preserved in the museum collections, and will now be useful to science.” 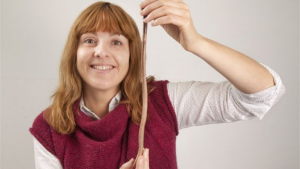 However, not everyone was delighted with Dave’s scientific sacrifice, and social media sites have been flooded with tributes.

Among the tributes to Dave left on Twitter, Jessy Harvey wrote: “Still saddened by the senseless euthanasia of Dave the earthworm.”

Jungle Janet posted: “RIP Dave. You were unique and before your time and it would have been amazing to see a blackbird wrestle with you.”

Kevin wrote: “He might have got bigger if you hadn’t murdered him!!!”

And Andre Walker said: “It does strike me as odd the Natural History Museum measured the UK’s longest ever worm then killed it!”

She also added that “only very few” earthworms were kept as a record and they were “euthanised humanely to professional standards”.

Dave would “have a legacy that lasts beyond all of our lifetimes,” she said.

“These specimens help scientists better understand and protect the natural world, from studying an individual species to looking at environmental impacts of climate change, pesticides or human health”.