Reports of a masked gunman shooting on the streets of Paris are emerging, the person has just been shot dead and it is not clear if he is acting alone.

The man was heard shouting in an ‘Arabic’ language but it is unclear whether he was an asylum seeker or if it related to the ISIS terror network.

The Paris police are saying that this IS a terrorist attack against France, and began at 20:15 UK time.

We will be updating this LIVE situation as it comes. 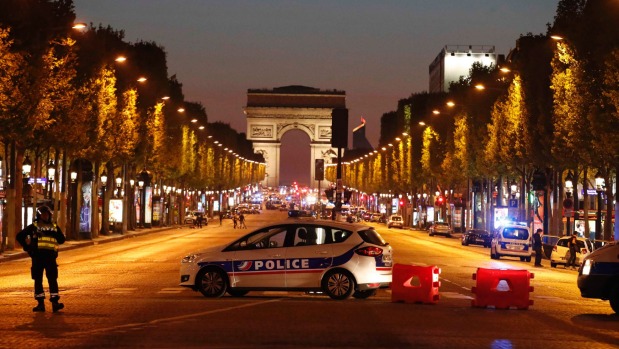 A gunman left a vehicle with a kalashnikov rifle and began shooting the police (armed) – One has died, others are severely injured – A second attacker has been spotted nearby.

There is panic on the streets of Paris this evening after a gunman opened fire and shot one police officer dead and seriously injured another on the Champs Elysees in Paris. There are understood to have been two attackers and one has been shot dead. The road has been locked down with hundreds of heavily-armed officers flooding the area which is popular with tourists. France is currently under a state of emergency following a spate of Islamist terror attacks and the horrifying incident comes as presidential candidates took place in a TV debate nearby. French police have advised those in the city to stay clear of the area. The shooting comes just hours after one of the busiest roads in the capital was closed off by police as officers dealt with a ‘suspicious package’

Riot vans are filling the streets

A COUNTRY UNDER SIEGE: TIMELINE OF FRANCE TERROR
March, 18, 2017 – Convicted criminal with links to radical Islam shouted ‘I am here to die for Allah, there will be deaths’ seconds before he was shot dead during an attack at Orly airport. The 39-year-old, named locally as career criminal Ziyed Ben Belgacem, was killed after wrestling a soldier’s gun from her and fleeing into a McDonald’s. He sent a text message to his brother and father stating ‘I shot the police’, shortly before he was killed.
February 3, 2017 – A man is shot five times outside the Louvre museum in the heart of Paris after attempting to storm the historic art gallery.
July 14, 2016 – Amid Bastille Day celebrations in the Riviera city of Nice, a large truck is driven into a festive crowd. Some 86 people from a wide variety of countries are killed. The driver is shot dead. Islamic State extremists claim responsibility for the attack. The state of emergency in France is extended and extra protection, including robust barriers to prevent similar attacks, is put in place at major sites in France.
June 13, 2016 – Two French police officers are murdered in their home in front of their 3-year-old son. Islamic State claims responsibility for the slaying, which was carried out by a jihadist with a prior terrorist conviction. He is killed by police on the scene.
Nov. 13, 2015 – Islamic State militants kill 130 people in France’s worst atrocity since World War II. A series of suicide bomb and shooting attacks are launched on crowded sites in central Paris, as well as the northern suburb of Saint-Denis. Most of those killed are in a crowded theater where hostages are taken. Islamic State extremists claim responsibility and say it was in retaliation for French participation in airstrikes on the militant group’s positions in Syria and Iraq. It leads to the declaration of a state of emergency in France. Police powers are expanded.
Jan. 7, 2015 – Two brothers kill 11 people inside the Paris building where the satirical magazine Charlie Hebdo is headquartered in what Islamic State extremists claim is retaliation for the publication of cartoons about the Prophet Muhammad. More are killed subsequently in attacks on a kosher market in eastern Paris and on police. There are 17 victims in all, including two police officers. The attackers are killed

< Prev StoryAbsolute Zero F**ks Given By These 15 Animals