A video has emerged on YouTube which captures the moment a Harley Davidson biker narrowly escapes death after crashing into a car on an LA motorway and landing on the boot.

At the start of the video you can see the motorcyclist in the outside yellow lane of a four-lane freeway, without warning a blue Toyota saloon pulls across into the motorbike and carpool lane and cuts the motorcycle rider up.

The bikeer doesn’t have time to break and crashes straight into the back of the car and is then thrown onto the boot, narrowly escaping being run over by multiple vehicles.

When the car finally stops, the furious biker limps up to the driver’s window and says: “Are you joking me?”

“Bro are you kidding me? I almost just died. I was on top of your car.”

The driver stares straight ahead and mumbles a feeble apology.

However, the fed-up biker has clearly had enough.

He shouts: “You are not sorry. You almost killed me. My leg is f***ed right now dude.

“What are you thinking there is a yellow line for a reason. Pull the f*** over. I don’t even know if my bike can move right now. What are you doing?.” 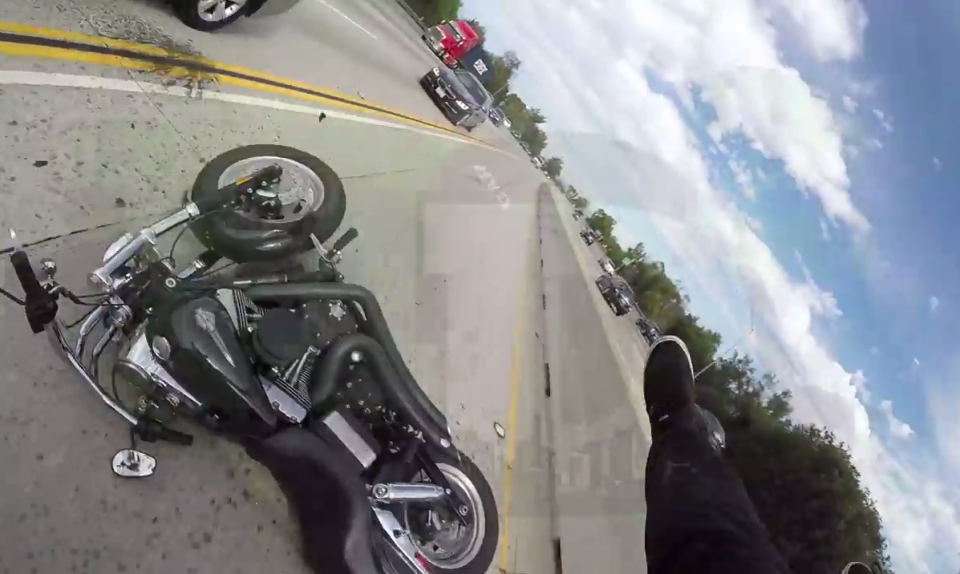 The biker involved in the accident posted the video on YouTube to help promote safety awareness. Underneath the video he writes: “There were a lot of things wrong in this situation, this whole event could have been diverted if the driver had simply looked before illegally crossing the double yellow into the Carpool lane.

“The driver that cut me off was in a rental and had bypassed the insurance paperwork. Always have proper coverage!”

< Prev StoryGet Ready For A Heatwave, Because Summer Is Officially Here At Last!