Katie Hopkins has been reported to police for calling for a “final solution” amid the latest terror attack at Manchester Arena. 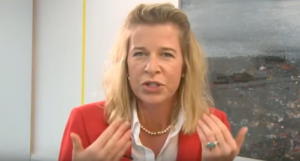 The Mail Online columnist deleted the tweet in quick fashion, which echoed the Nazi term for the Holocaust, amidst widespread condemnation for the emotion evoking post. 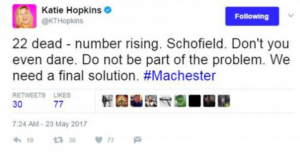 “Do not be part of the problem. We need a final solution. #Machester [sic].”

It was swiftly deleted and replaced with a re-worded message reading “we need a true solution”, but critics are calling for Ms Hopkins to be fired by Mail Online and LBC radio.

Ms Hopkins has been reported to the Metropolitan Police as a result of the tweet, which was part of an extended anti-Muslim outburst. The force stated that it was too early at this time to confirm whether an investigation would be launched.

It came after at least 22 people were killed and 59 injured in a suicide bombing at Manchester Arena on Monday night.

Thousands of people, including many children and teenagers, were leaving an Ariana Grande concert and heading towards Victoria Station when the blast hit the foyer area of the building.

It is the worst terror attack in the UK since 56 people were killed in the London bombings on 7 July 2005.

Police are treating the Manchester bombing as a terrorist incident and are investigating whether the bomber was acting alone or as part of a wider network.