A mother and her two girls aged five years and 17 months are lucky to be alive after miraculously surviving being hit by a car whilst walking to school in Benfleet, Essex.

Mandy White, aged 42, was on the way to the school with her five-year-old and 17 month old daughters when a car which had been knocked out of control in a crash at a busy junction mounted the pavement and rammed into the family.

In the video you can see the distraught mother scrambling to help her 17-month-old baby who is in a pram trapped under the front of the vehicle.

The mum-of-four who lives in Benfleet, Essex, said: “A white Vauxhall Corsa went straight through the junction of The Avenue and Seymour Road instead of giving way. The lines are so faint that they are barely visible.

“It clipped the back of a silver Toyota Yaris which forced that car to spin 90 degrees and mount the pavement.

“The car hit us and pinned me, my Taylor who was in a pram, and my five-year-old daughter Poppy up against a fence.

“I remember lying on the floor and my five-year-old was laying right next to me with the car over her legs. 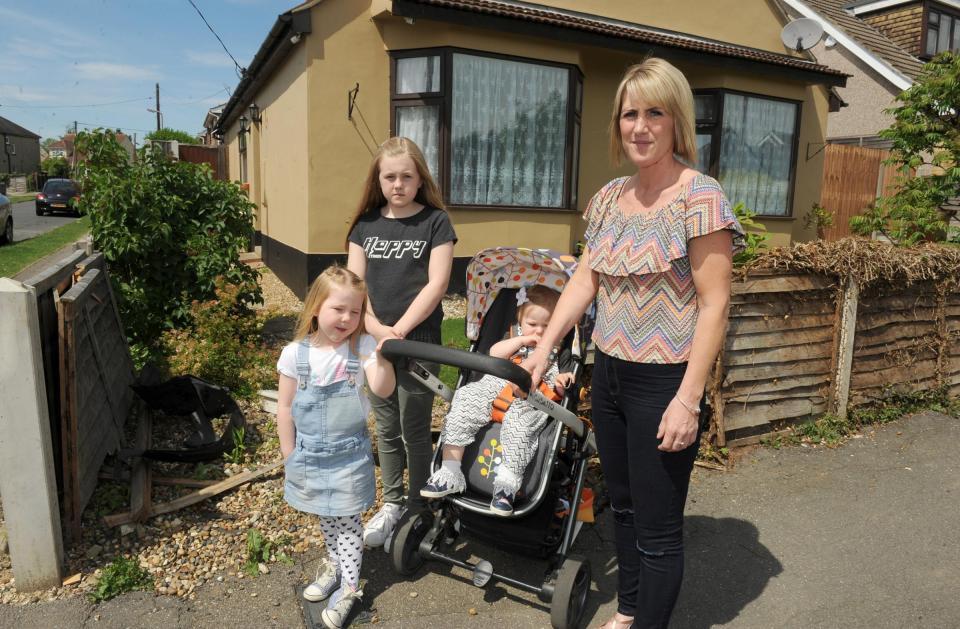 Mandy White has told of how her daughter Poppy, five, and her 17-month-old baby Taylor were rammed by the out of control motor

“We were all screaming because the car was still revving and I thought that car was going to crush my children. I don’t remember how we got out. We’re lucky to be alive.”

Mandy and her two children were rushed to hospital and treated for facial and leg injuries. Mandy also suffered from whiplash and is traumatised by the incident:

She added: “To move on from this I need answers. The thought of walking my kids to school gives me such anxiety at the moment.

“My heart is pounding just speaking about it.

“If it hadn’t been a fence and it was a brick wall I think Poppy certainly wouldn’t be here now.

“I really thought I was going to lose them [my two younger daughters] that day. I just keep reliving it in my head.

“We really were very lucky.

“We really don’t want to be apart from each other at the moment.”

A 58-year-old man called Lee Scarisbrick whose house is on the junction caught the whole incident on his CCTV cameras.

Lee Scarisbrick described the scene as harrowing adding “You can’t quite believe how Mandy and her children weren’t killed.”

Mr Scarisbrick said: “It’s harrowing to watch. You can’t quite believe how Mandy and her children weren’t killed.

“The lady driving the car that was clipped was absolutely traumatised because she thought she could have killed them.

“This junction has seen many accidents over the last 30 years that I’ve lived here. On the same day I saw three other vehicles overshoot the junction.

“I first reported it to the council in 2015 but they say the lines do not meet the requirement for repainting. It’s going to take a fatality before they do anything.”

He and Mandy have both urged Essex County Council to repaint the give way markings.

Essex Highways has responded to the issue.

A spokesperson said: “Our inspectors will visit and check the lines and repaint if required. However, there are also prominent ‘Give Way’ signs on posts at the junction.”

Next Story >Manchester Terror Attack: The Dead And Missing That Have Been Confirmed So Far