The socialsphere is on fire today, after an 11-year-old girl claimed on a student feedback form that her school was guilty of committing a war crime, as defined in the 1949 Geneva Convention. 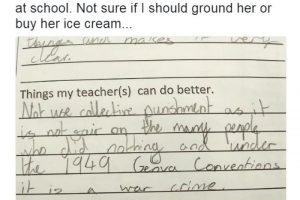 The girl’s father, author Mason Cross from Glasgow, posted a photo to Twitter of the offending feedback form, saying jokingly that he was not sure if he should “ground her or buy her ice cream”.

When asked for feedback on thing her “teacher(s) can do better”, Ava Bell suggested that they stop collectively punishing students because “under the 1949 Genva Conventions it is a war crime”.

The post by Mr Cross (below) has been liked more than half a million times, and shared more than 150,000 times.

My daughter actually submitted this feedback at school. Not sure if I should ground her or buy her ice cream… pic.twitter.com/4v8Gjb9riv

Ms Bell’s father has since posted a clarification on her behalf, saying that she “thinks her teacher is awesome” and that “it’s just this aspect of the educational justice system she has an issue with”.