Footage filmed on a mobile camera has emerged online, which shows a 16-year-old boy punch and knock out a 47-year-old defenceless man in Blackpool, before running off leaving the victim lying on the floor with blood coming out of his skull.

The victim Michael Rhodes, is currently in hospital on a life-support machine, and is unlikely to survive the incident which happened on Saturday, May 20.

The 40 second long video shows the teenager confronting Mr Rhodes outside the Costcutter store in Blackpool. As the boy approaches him, the man takes a step back before being punched in the face. He then falls backwards down some steps and cracks his head on the pavement.

The teenager who was accompanied by two friends, then panics and runs from the scene leaving Mr Rhodes lying on the floor. The victim is still on a life-support machine at Royal Preston Hospital, suffering from severe head injuries.

A 16-year-old boy has been charged with causing grievous bodily harm, whilst two other boys have also been arrested in connection with the attack. The shocking footage which is spread across social media has been shared more than 15,000 times.

The attacker who cannot be identified for legal reasons appeared before Blackpool magistrates and was bailed to reappear at a later date, he did not enter a plea.

The court was told that Mr Rhodes’s life-support machine was to be turned off by doctors, but that decision has not yet been made.

A spokesman for Lancashire Police said: ‘A 16-year-old boy from Blackpool has been charged with inflicting grievous bodily harm without intent and has appeared at Blackpool Magistrates’ Court. 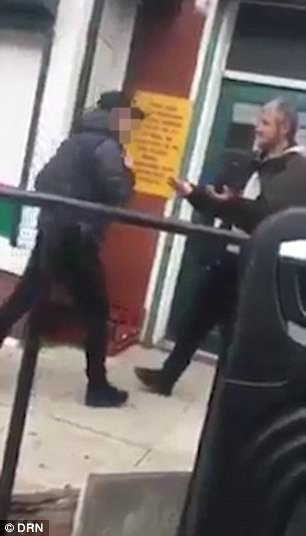 The gang of laughing yobs filmed the brutal assault on a mobile phone following a row outside a Costcutter store in Blackpool, Lancashire

‘Two boys, aged 12 and 14, both from Blackpool, were arrested on suspicion of assault and have been released under investigation pending further enquiries.

‘The injured man remains in a critical condition.’

‘Whatever you saw, we would urge you to get in touch.’

Anyone with information is asked to contact the force on 101, quoting incident number 875 of May 20.