Police in Humberside pulled over a driver speeding at 105 mph on the M62 motorway and were shocked to find three babies being held by their mother in the front passenger seat.

What was even more shocking about this incident was that the adults had strapped in all their luggage in the child car seats in the back, rather than using them to keep their little children safe.

“Just stopped Ford C-Mac on M62 doing 105mph. Car had 4 adults and 3 babies in arms of their mum, not strapped in! 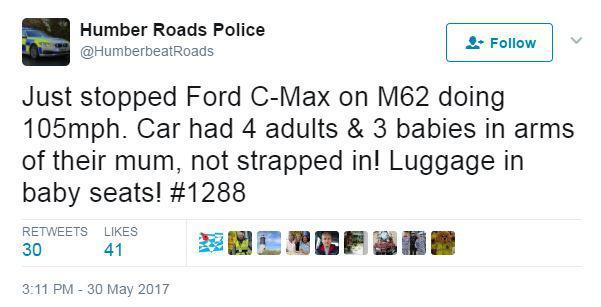 One Twitter user replied to the tweet asking how the person was going to be punished. The officers replied that the driver was booked for speeding and dangerous carriage of passengers and would be taken to court.

The maximum fine for breaking the speed limit on motorways is currently £2,500.