A holidaymaker was left distraught when she discovered her puppy had died – after the professional pet sitter sent her photos of the dead dog.

Denise Maguire, 55, was on a Caribbean break and had paid House and Home Sitters Ltd £540 to look after her chocolate labs Rhea and Delphi full time. 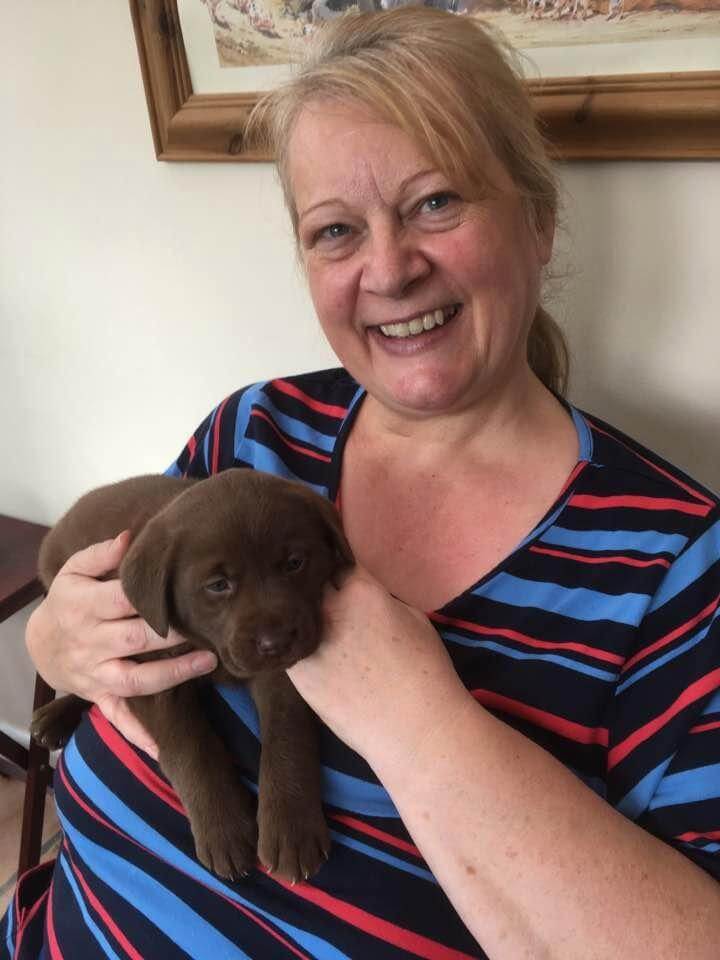 Denise, pictured with Delphi as a puppy, found out her pet had died when she was on holiday 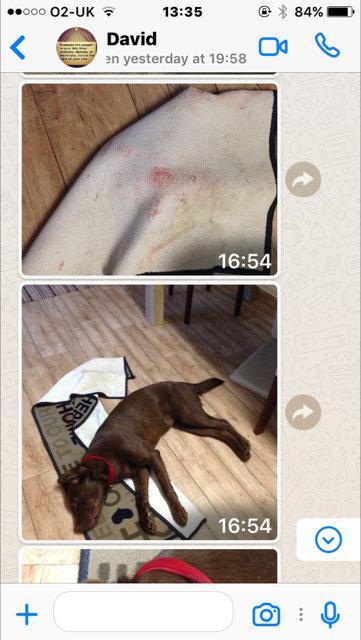 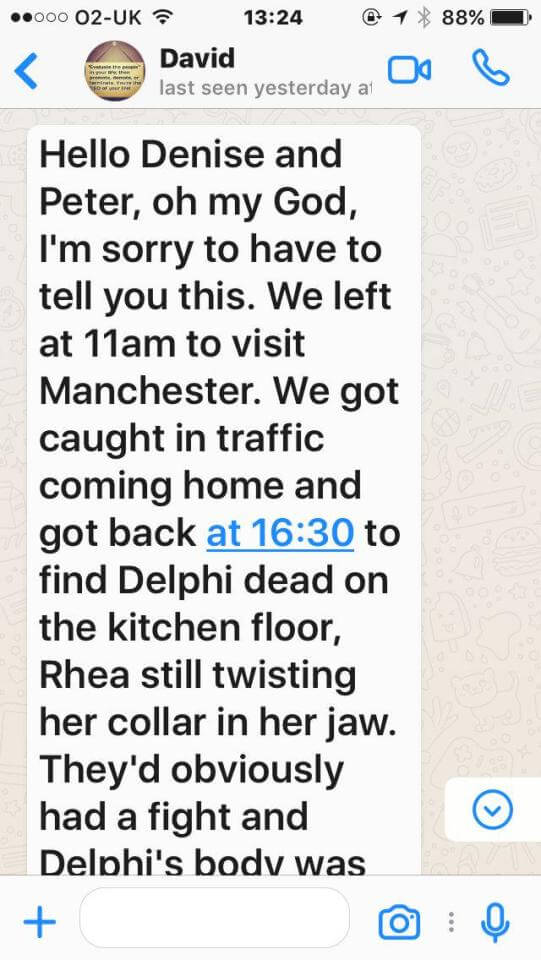 But she was horrified when, four days into the break, she got a WhatsApp message from the live-in sitters to say seven-month-old Delphi had died.

Cancer-sufferer Denise was left distraught when seconds later it was followed by nearly a DOZEN photos of her dead pooch lying bloodied on the carpet. 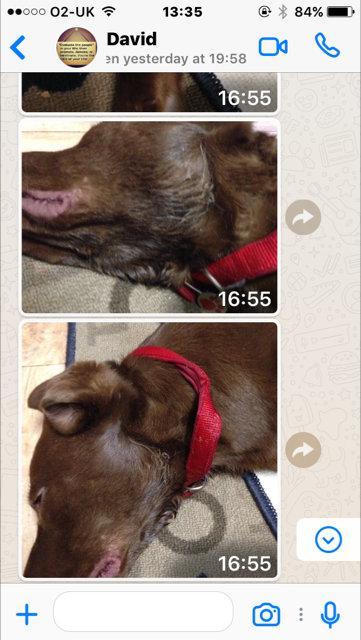 And they were outraged when the firm apparently blamed their other dog and then the COUPLE for the deaths.

Denise, from Retford, Notts., said: “I was hysterical. It was horrendous. My dogs are my babies.

“To get the news like that – in that insensitive way – and for it to be followed up by those photos was devastating.

“It was so unprofessional. Nobody wants to find out like that. They had our phone number, the number for the hotel, and for our breeder.

“And then for him to blame Rhea – those dogs loved each other and I just don’t accept it.”

The couple, who don’t have children, bought the £650 pups to bring them “more joy” after Denise was diagnosed with incurable non hodgkin’s lymphoma in 2009.

They booked House and Home Sitters to look after their house and pets for 12 days in February while they went on holiday to Barbados.

It was agreed director David Price and his partner Mai would live in the home – not leaving for more than four hours at a time – for £540. 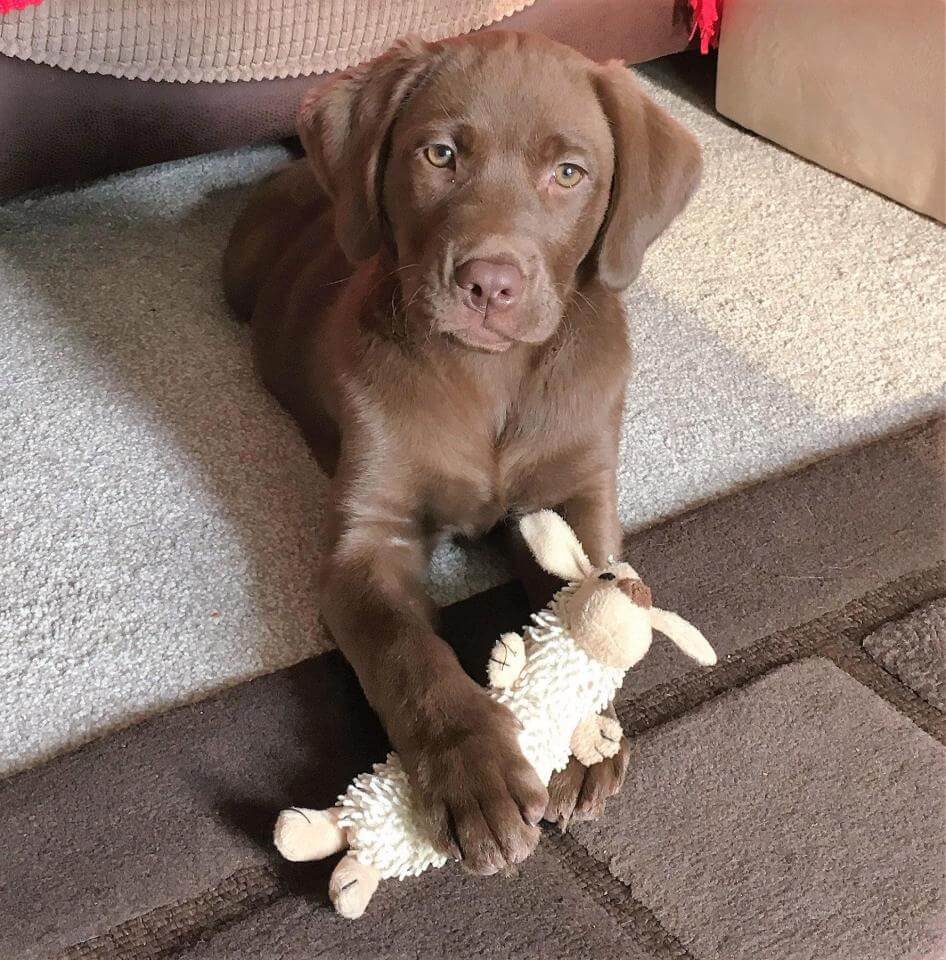 The couple booked House and Home Sitters to look after their house and pets, including Dephi (pictured) for 12 days in February

But on the fourth day of their holiday, Denise got a message from David telling her seven-month-old Delphi had died, on February 8.

It said: “Hello Denise and Peter, oh my god, I’m sorry to tell you this.

“We left at 11am to visit Manchester. We got caught in traffic coming home and got back at 16.30 to find Delphi dead on the kitchen floor, Rhea still twisting her collar in her jaw.

“They’d obviously had a fight and Delphi’s body was already stiff and cold.

“There was absolutely nothing we could do.

“As you’ll see from the photos there was blood on the mat under Delphi, although no obvious bite wounds we can see.

“Mei saw Rhea snap at Delphi yesterday but we thought it was just normal rivalry.

“Rhea is looking mortified. We are truly sorry to have to give you this dreadful news.”

And without warning just one minute and 26 seconds later it was followed by TEN photos of her dead dog.

The firm apparently tried to blame the couple’s other dog Rhea, left, for the death

Denise and Peter flew home the next day, paying £400 for earlier flights, and picked up Rhea from friends and ordered a postmortem for dead Delphi.

They say it concluded she had no bite marks or evidence she had been attacked by Rhea – but she had a broken neck.

Denise added: “They said it could have been anything like her getting caught on a handle on a cupboard, or even falling.”

Denise suggested the couple were to blame for leaving the dogs alone for so long, but David Price in return blamed Rhea and then Denise for the death.

Referencing Denise’s illness, in an email she claims he sent, David said: “A pathological sociopath hides behind her supposed terminal illness whilst displaying no conscience about placing two large breed dogs in a small home, not to mention the cruelty of their ‘cage’ without regard to the nature of all dogs to dominate.

“Delphi, as you fully know, dominated the food.

“A domination struggle was inevitable, one which led in the end to far bigger Rhea killing Delphi.” 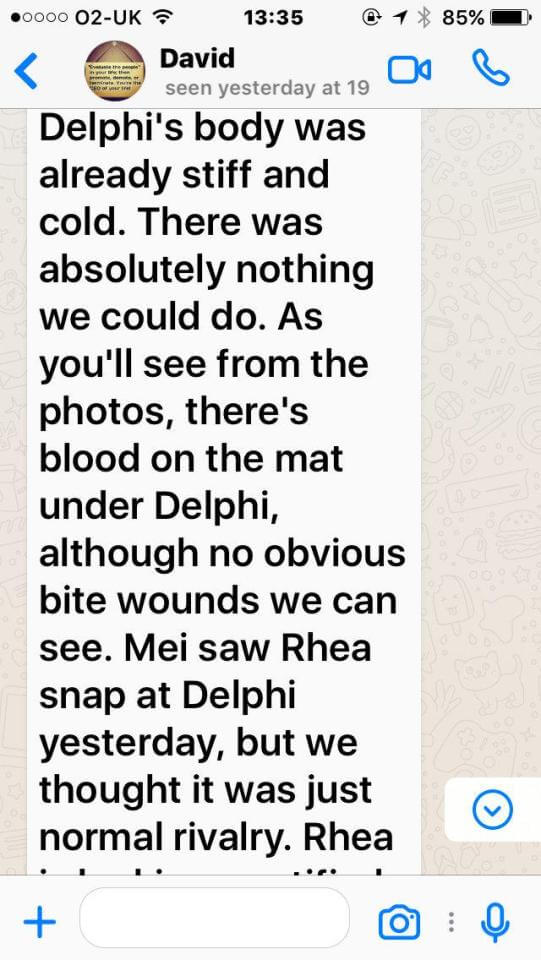 The pooch was sprawled out on the carpet on its side, eyes just open, with blood on a mat under its body

David Price of House and Home Sitters Ltd admitted the dog died – but said it was killed by the larger pup.

He claimed the older dog had the dead pet’s collar in his mouth when he found them, and defended breaking the news via WhatsApp message.

He added: “Their negative report appears to be more about money, evidenced by their claiming over £5,200 on the insurance.

“The insurance company rejected the claim, finding House and Home Sitters neither negligent nor liable, based upon the vet’s post-mortem report, which confirmed the older dog killed the younger one, citing possible ‘puppy exuberance’.

“This could just as easily have happened when they themselves were home, and the same scene would then have confronted them.

“I called Ms Maguire a sociopath after she called me a psychopath, since it takes a person without conscience to keep two large breed dogs in a clearly too small home, and then additionally confine them to a small cage in the kitchen, whilst only allowing them about 20 minutes per day exercise.

“H&H always strives to provide and improve our service, and this is one more lesson learnt.”