A remarkable set of colourised photos has emerged on the 73rd anniversary of the D-Day landings shedding new light on the day Allied troops fought their way on to the beaches of northern France.

Black and white images of brave soldiers wading onto Omaha beach on the Normandy coast and advancing on Nazi positions have been transformed using Photoshop.

Separate pictures show exhausted servicemen being dragged ashore by medics and British, US and Canadian troops and members of a US parachute regiment preparing for the landings.

The colourised images emerged on the 73rd anniversary of Operation Overlord, which saw some 156,000 Allied troops landing in Normandy. It is thought as many as 4,400 were killed in an operation the Second World War Prime Minister Winston Churchill described as ‘undoubtedly the most complicated and difficult that has ever taken place’. 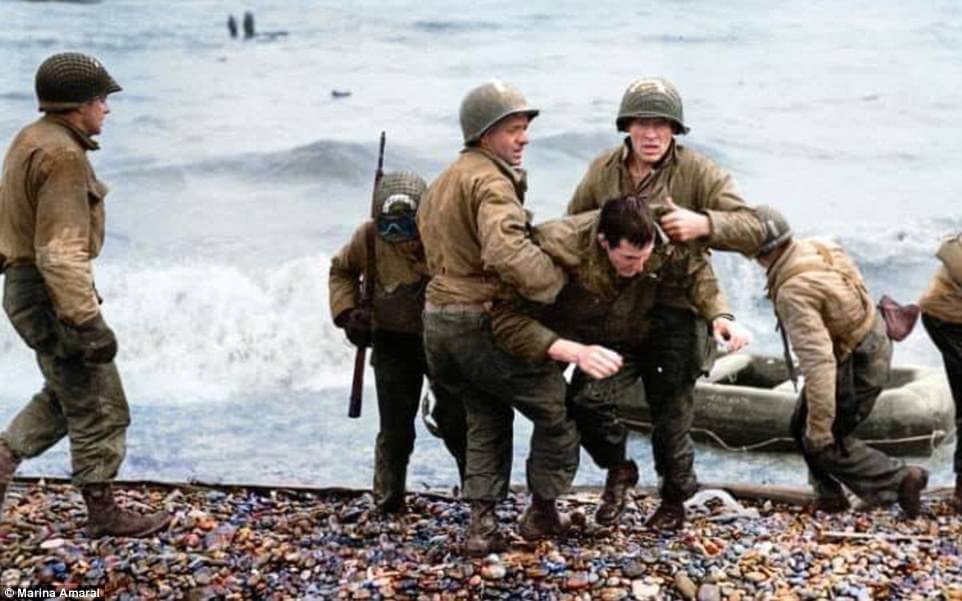 D-Day medics From America’s 5th and 6th Engineer Special Brigade help wounded soldiers as they reach Omaha Beach. In the background, survivors of sunken landing craft who reached the beach by using a life raft are helped ashore. 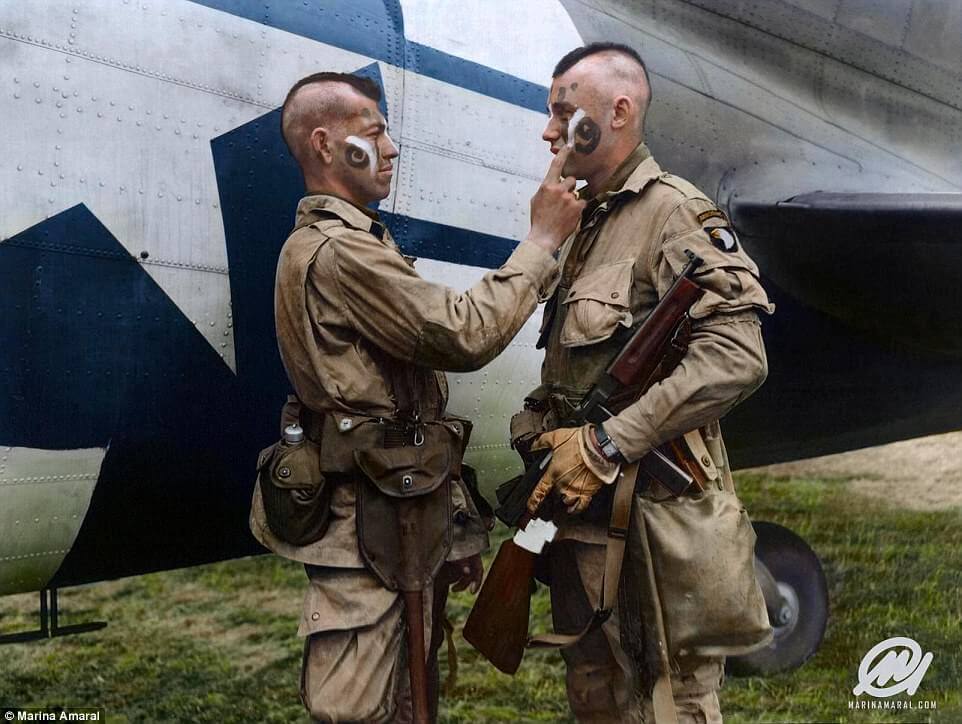 Clarence Ware applies war paint to Charles Plaudo in England on June 5, 1944. They were both members of the so called Filthy Thirteen section of the US 101st Airborne Division. The idea came from unit sergeant Jake McNiece, who was part Chocataw and was designed to energise the men for the danger ahead

Brazilian artist Marina Amaral painstakingly researched the images as she gave them a new lease of life with colour using Photoshop.

She told MailOnline: ‘Besides the uniforms, I tried to reproduce the atmosphere of the places and get as close as possible to what these soldiers actually saw with their own eyes.

‘The generation of World War II are almost all gone, so I think it is extremely important to rescue these photos through a process that interests the new generation – so maybe people will be able to better understand what happened. This is what I’ve been trying to do since I began colourising photos two years ago.

‘I like to keep in mind that I’m working with historical facts, and it’s not my job to change that story and make it look the way I want it to look. 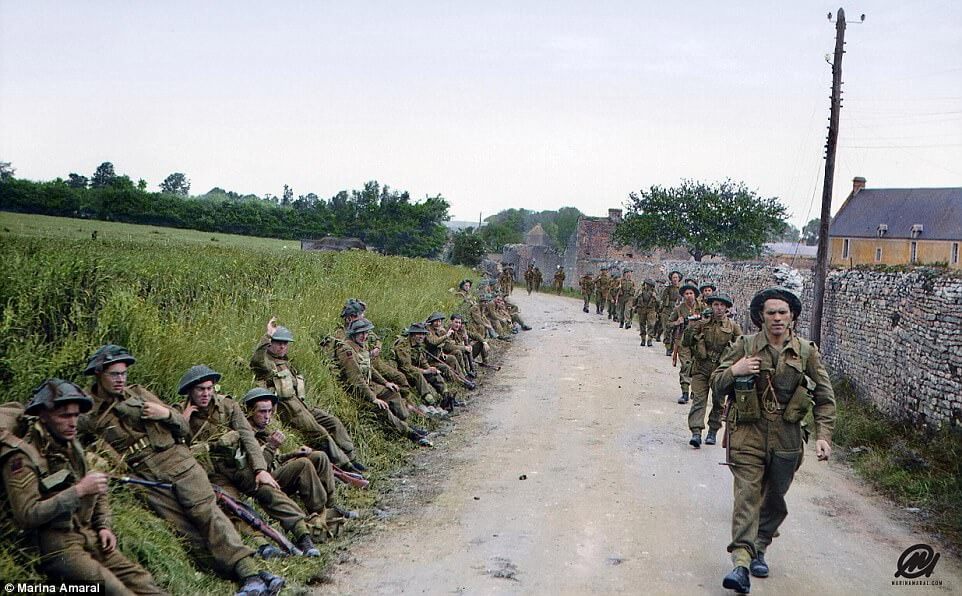 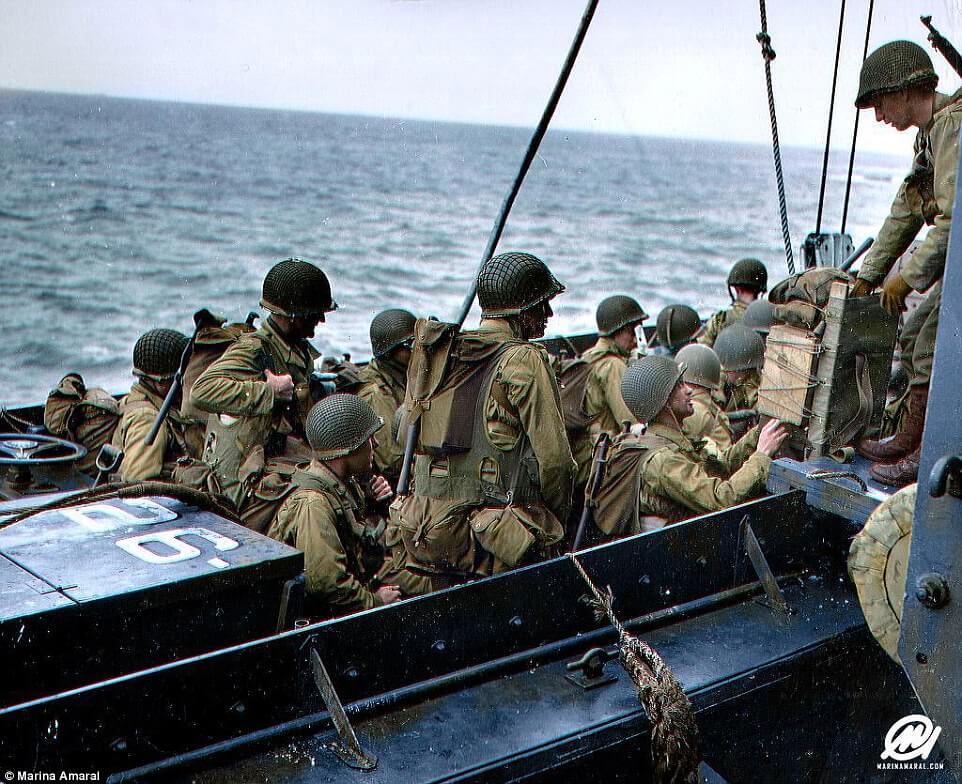 The pictures emerged on the 73rd anniversary of Operation Overlord, which saw some 156,000 Allied troops landing in Normandy 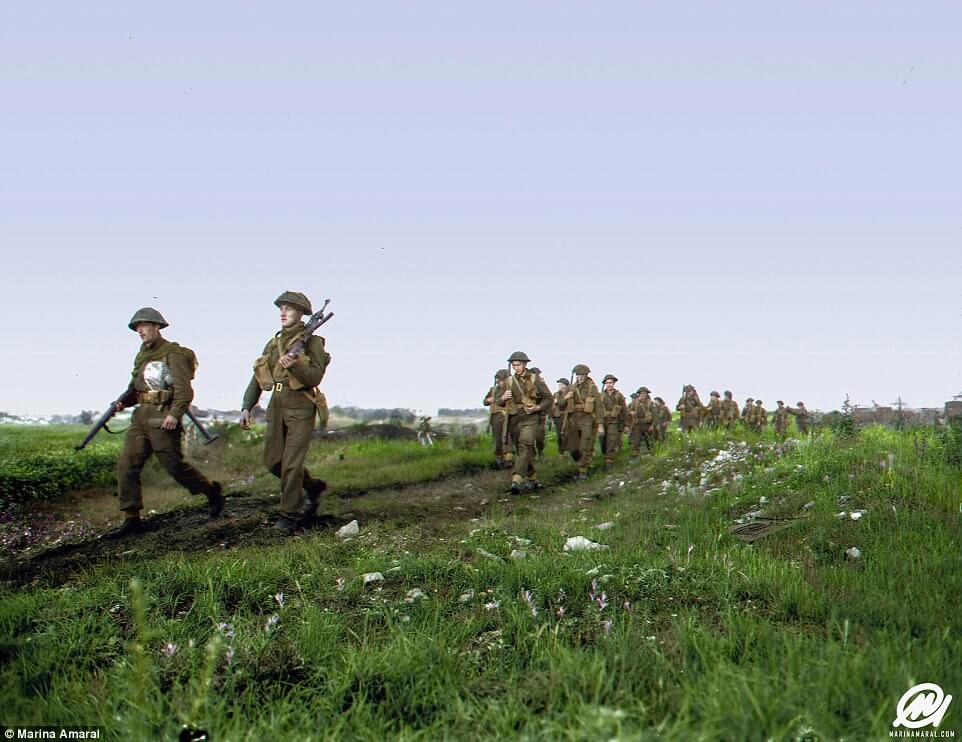 Men of the Royal Winnipeg Rifles on the march in Normandy in July 1944. Brazilian artist Marina Amaral painstakingly researched the images as she gave them a new lease of life with colour using Photoshop

‘I have to be respectful, and therefore, gather all the historical information possible in order to create images as close as possible to the reality of the scene portrayed. So I am always in touch with historians and they help me a lot to achieve this goal.

‘Everything is done manually in Photoshop. I need to mask every object you can potentially see in the picture and assign to them a base colour.

‘Then I go slowly building up the atmosphere I want to reproduce, always keeping the original lighting in mind, through many different layers, exploring and using as many colors as I can.’

The assault was conducted in two phases: an airborne landing of 24,000 British, American, Canadian and Free French airborne troops shortly after midnight, and an amphibious landing of Allied infantry and armoured divisions on the coast of France commencing at 6.30am.

The operation was the largest amphibious invasion in world history, with over 160,000 troops landing. Some 195,700 Allied naval and merchant navy personnel in over 5,000 ships were involved. 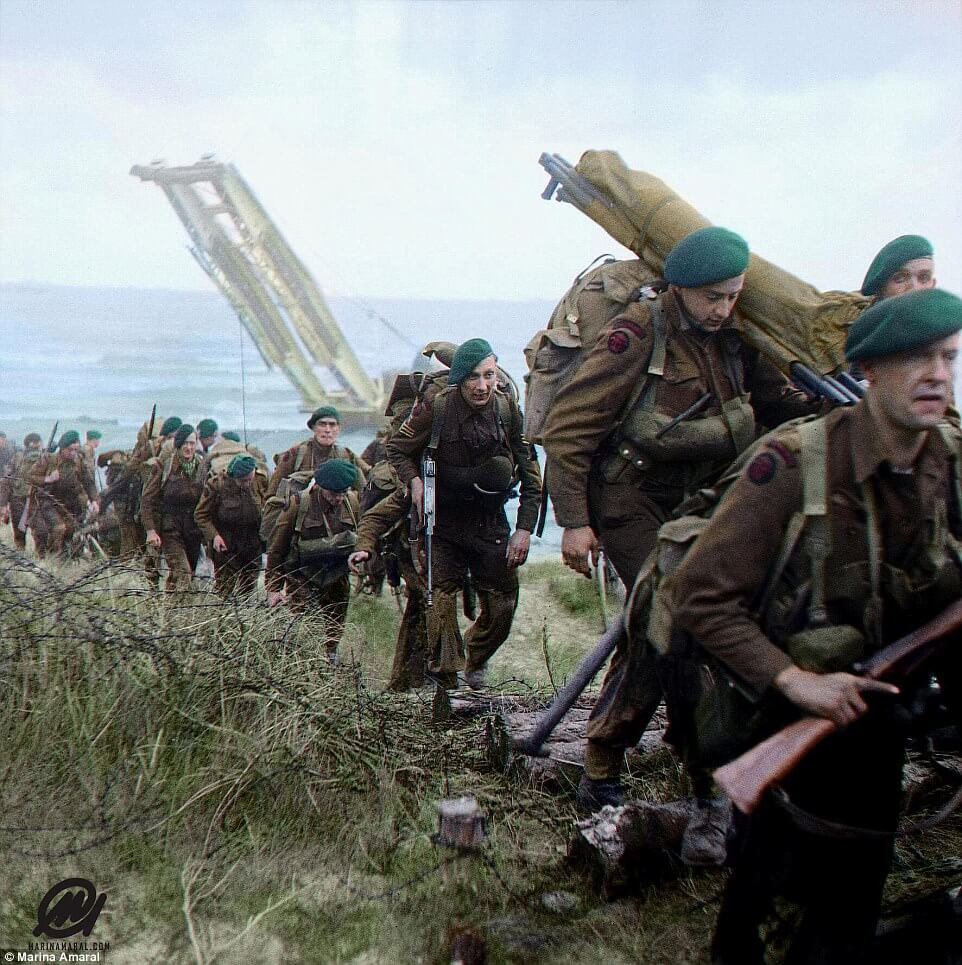 Royal Marine Commandos attached to 3rd Division move inland from Sword Beach on the Normandy coast on June 6, 1944. Thousands of British and US airborne troops parachuted in to Ranville and St Mère-Église in Normandy 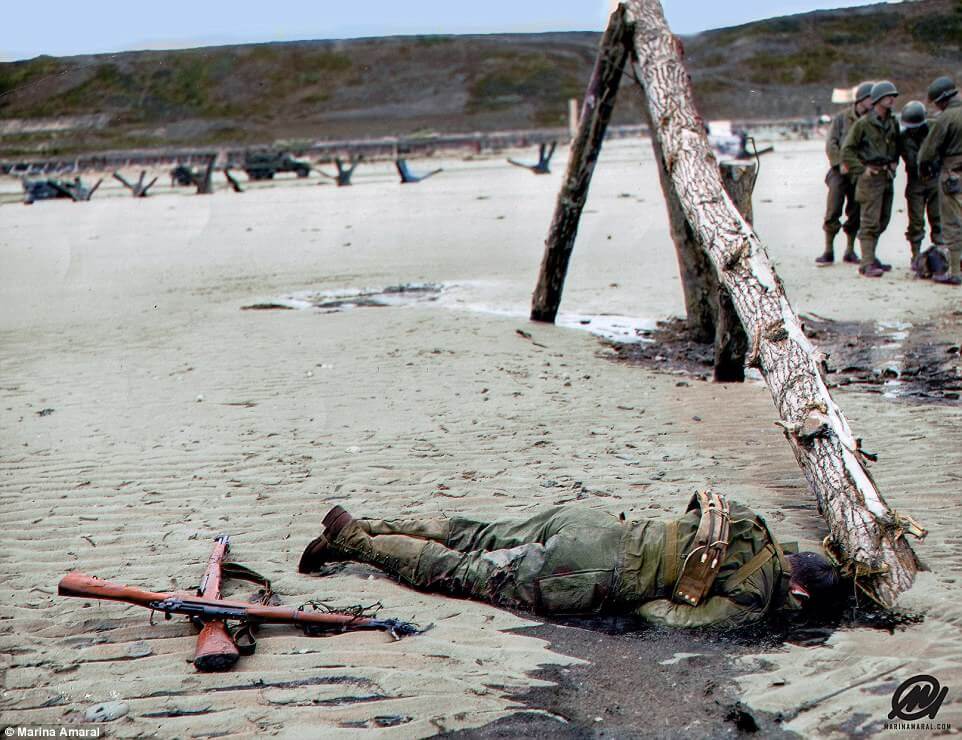 The cost of war: A stark image, colourised by a Brazilian artist, shows an Allied soldier lying dead in the sand in the wake of the D-Day landings 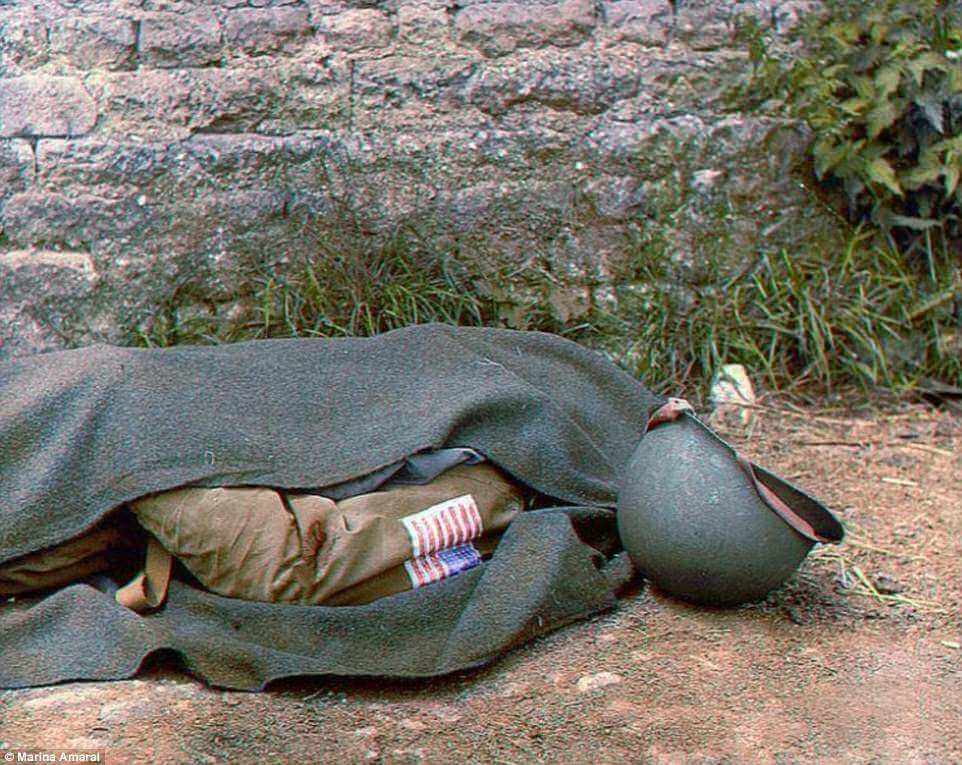 The landings took place along a 50-mile (80 km) stretch of the Normandy coast divided into five sectors: Utah, Omaha, Gold, Juno and Sword.
The assault was chaotic with boats arriving at the wrong point and others getting into difficulties in the water.

Troops managed only to gain a small foothold on the beach – but they built on their initial breakthrough in the coming days and a harbour was opened at Omaha.

They met strong resistance from the German forces who were stationed at strongpoints along the coastline.

Between 4,000 and 9,000 German troops were killed – and it proved the pivotal moment of the war, in the allied forces’ favour.

The invasion had required the transport of soldiers and material from the United Kingdom by troop-laden aircraft and ships, the assault landings, air support, naval interdiction of the English Channel and naval fire-support.