England’s Under-20 side celebrated a famous World Cup win in South Korea, beating Venezuela 1-0 to become the first Three Lions team to win a final since the famous team of 1966.

No England side has won a World Cup final at any level since Bobby Moore lifted the famous trophy 51 years ago, but Bournemouth’s Lewis Cook had the honour of lifting the trophy on Sunday.

They came close twice before, reaching the semi-finals in 1981 and 1993, with the latter team featuring Manchester United treble-winner Nicky Butt.

Calvert-Lewin opens the scoring for England in South Korea (Picture: Getty)The XI that started in Suwon featured no United players, with five Everton players making up the core of the squad, and it was forward Dominic Calvert-Lewis who scored the all-important goal.

England dominated the early exchanges, controlling possession, but Venzuela looked dangerous on the break and thumped the post with an outrageous dipping free-kick from the half-way line.

Despite their intricate and considered build-up, England’s deadlock-breaking goal came via a more direct approach.

A long ball forward was brought down by Calvert-Lewin, who prodded the ball past the otherwise excellent Venezuelan goalkeeper Wuilker Farinez after he had saved the initial effort.

England came under more pressure after the restart when Venezuela’s star man, Yeferson Stoeldo, came off the bench – he had not been fit enough to start the contest.

The 5’3” playmaker caused panic amongst the Three Lions defence immediately, finding space, threading through-balls and using his searing speed to run at the heart of the defence.

Josh Onomah gave a dominant display in midfield, fighting hard to wrestle back control of the match, and almost killed the tie mid-way through the second half.

The Tottenham midfielder won possession, dribbled past two players and thumped a superb effort towards goal from 30 yards that rattled the underside of the crossbar and bounced off the line.

Venezuela continued to pose a threat, especially when England were briefly reduced to 10 men while Dominic Solanke received treatment for a bloody head injury, and looked certain to equalise when they were controversially awarded a penalty with just over 15 minutes remaining. 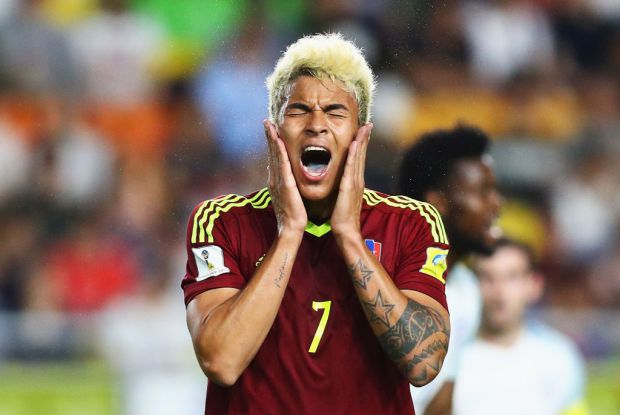 Penaranda could not believe his penalty kick was saved by Woodman (Picture: Getty)

Jake Clarke-Salter floored Adalberto Penaranda inside the box and, after several minutes of consideration, the video referee confirmed the decision.

Peneranda picked himself up off the deck to take the spot-kick, but put his effort right down the middle of the goal allowing Freddie Woodman to paw the ball away with an excellent save.

Venezuela continued to lay siege to England’s goal as the Young Lions clung on, with Woodman forced to make another fine save to prevent an own goal.

But England did hold on, and celebrated wildly when the full-time whistle was blown, hugging their match-winning goalkeeper, as they lay down a marker for a golden generation of young English footballers.