A father of six is lucky to be alive after being hit by a lightning bolt that doctors said was ‘five times hotter than the sun’.

George Allen, 37, from Northern Ireland was struck during a storm at Killowen Primary School in Lisburn, whilst attending a school sports day with his children Geordie Jnr, five, and seven-year-old Georgha.

Mr Allen’s heart stopped for 55 minutes and he was in a coma for four weeks, doctors also feared that he would never be able to walk again after the incident, which also burned his daughters clothes into her skin and threw his boy out of his arms and catapulted him across the playground.

“One of the doctors said I wouldn’t walk again but I got in to an argument with him,” he said.

“I wasn’t prepared to settle that that was me done.

“There was pain behind everything but it’s either that or you would be six feet under.

“I have scars on every muscle on my body because they had to open me up to make sure I wasn’t damaged or cooked.”

After spending four weeks in a coma, the dad of six then had to spend five months in hospital, strapped up to monitors and being unable to walk.

He said: “When I woke up, I had lost ten years of my life. I was really confused.

“It’s still all blank. Now I don’t even try to remember. I did try to at the start but I don’t anymore. There’s a reason why I forget it.” 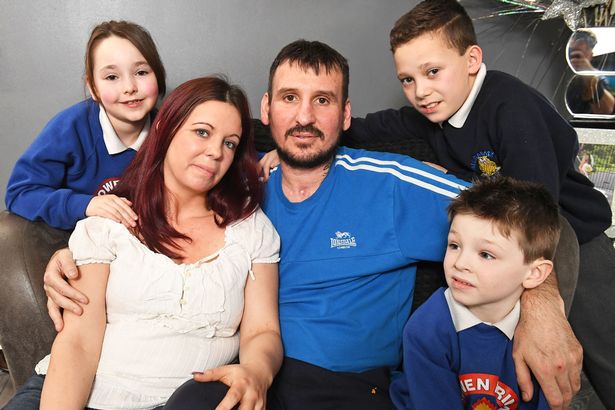 His two children were rushed to the ­specialist children’s unit at Royal Belfast Hospital, where it was discovered that his daughters raincoat had melted into her skin. Both children were released from hospital within a few days.

Geordie was taken to Lagan Valley Hospital, suffering from multiple organ failure and severe burns and needed for operations that day and was then transferred to a specialist care unit at Ulster Hospital.

Teachers were at the sports day managed to keep the father alive using Killowen Primary School’s defibrillator to deliver much smaller electric shocks to try to restart his heart.

Geordie said: “It’s very important for me to raise awareness. I wouldn’t have been here without a defibrillator. If it wasn’t in that school, I wouldn’t be here. They used that and it saved my life.”