A mum-of-six managed to escape the 21st floor of the Grenfell Tower fire with all her children but only four got to the bottom, a witness claimed.

Michael Paramasivan, who lives on the seventh floor, said the woman raced from her home as flames engulfed the west London tower block just before 1am on Wednesday.

But though she left the flat with all six of her children, only four of them made it down to the exit.

Mr Paramasivan told the Today programme: ‘There were many people fleeing as we fled the building. It was horrendous.

‘There was one woman who had escaped her flat on the 21st floor with her six children, but when she got down to the bottom of the stairs, she only had four of them with her.

‘She can’t find two of her children anywhere. She’s in a community centre absolutely breaking her heart.’

London Fire Brigade confirmed there had been a number of fatalities but could not confirm how many people had been killed. 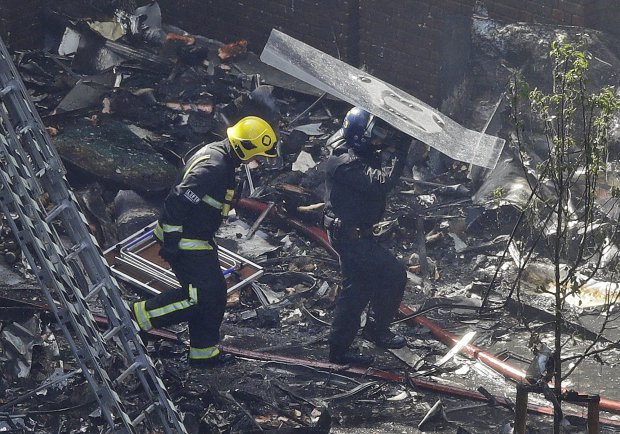 Michael also told Sky News how he woke up to the smell of plastic in the middle of the night and described looking out the window and hearing screams.

He said: ‘I looked through the fire hole and could see smoke everywhere..I’ve opened the door, the neighbours were there.. people screaming.

‘The firemen said to me “get down the stairs” so I’ve grabbed the little girl, I’ve grabbed my girlfriend ran out of the house just in a pair of boxer shorts and my dressing gown.

Another witness described how a baby was thrown out of the building.

Samira Lamrani said she saw a woman try to save a baby by dropping it from a window ‘on the ninth or 10th floor’ of the burning west London building, to waiting members of the public below.

She said: ‘People were starting to appear at the windows, frantically banging and screaming.

‘The windows were slightly ajar, a woman was gesturing that she was about to throw her baby and if somebody could catch her baby.

‘Somebody did, a gentleman ran forward and managed to grab the baby.’

She added: ‘I could see people from all angles, banging and screaming for help.

‘Us members of the public were reassuring them, telling them we’ve done what we can and that we’ve phoned 999, but obviously the look on their face was death.

‘My daughter’s friend said she observed an adult who made some sort of homemade parachute and tried to lower himself out of the window.’

Police this morning confirmed that at least six people have been killed in the fire but that number is expected to rise as investigations continue.

Fire crews are continuing to go through the building, floor by floor, looking for people trapped inside.