Police have revealed that five people reported missing in the Grenfell Tower fire have been found safe and well.

Commander Stuart Cundy announced the news in a statement shortly before 11am today but did not reveal the identities of the survivors.

Tragically, detectives investigating the Grenfell Tower fire say 79 people are now believed to have died – but they are not ruling out further fatalities.

Of those 79, only five have been formally identified and some bodies were so badly burned by the fire they may never be properly identified.

Three days ago, The Independent reported that a Syrian refugee family believed to be missing after the fire had been found safe and well.

The Khudair family – two parents and their three adult daughters – were unhurt in the fire, despite living ‘halfway up’ the tower block.

It is not clear if this family of five is the same five referred to by police in the statement earlier today.

One of the daughters, Rawan, speaking via Facebook, confirmed that the family had survived but that their flat was burned down and all their belongings destroyed.

The family were reported missing by Catherine Lindsay, who had been tutoring them in English.

The Khudairs moved to west London after fleeing as refugees from Syria.

They confirmed that they had been receiving help from the community after being left homeless.

Commander Cundy fought back tears as he told of entering the 24-storey block of flats on Saturday.

He pledged to return all the bodies back to their loved ones but said a criminal investigation, which will look at individuals and organisations, will take weeks. 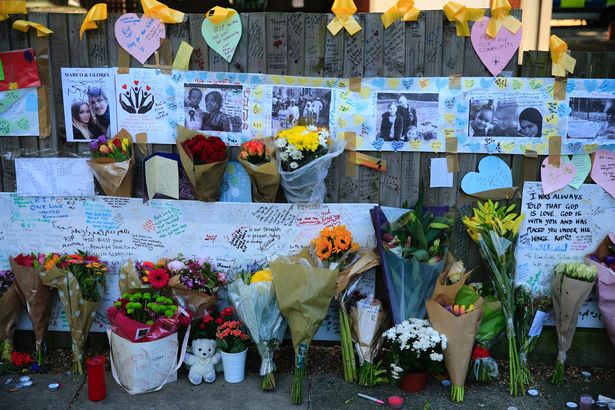 Tributes left to those missing and presumed dead in the fire

Scotland Yard say the 79 figure is likely to change, but not as significantly as in the wake of the tragedy.

Commander Cundy said: “Over the last 48 hours there has been a huge amount of effort to understand as confidently as we possibly can just how many people are missing who were in Grenfell Tower that night.

“Sadly if they are missing then I do presume they are dead.

“It is extremely complex and when we give out numbers I want to be as accurate as we possibly can be, I do not want to cause distress to communities.

“As of 8am this morning I believe there are 79 people that are either dead or missing, who I have to presume are dead.

“Of those 79 five people have been identified.

“Every one of those that have been confirmed or are presumed dead we have family liaison officers supporting those families.

“This is a truly awful fire, for many families they have lost more than one family member.

“This is an incredibly distressing time.

“What is important to all of us is to find everyone.

“On Saturday I was in there myself and went all the way to the top floor.

“It is incredibly hard to describe the devastation.