A man was stabbed to death outside his home by two machete-wielding teenagers on a moped, a court has heard.

Ricky Hayden, 27, who reportedly worked as a celebrity minder, ran out of his house bare footed in only a pair of boxer shorts, believing the youths were about to snatch his brother’s scooter.

Mr Hayden, along with his 21-year-old brother Perry and their father Paul, 55, were allegedly confronted by Tommy Roome and Tarrell Hinds armed with two large machetes.

Prosecutor Jonathan Rees QC told the Old Bailey: “Acting together, the first two defendants attacked the Haydens with the knives.

“In the course of the violence that ensued, Ricky Hayden received a number of wounds, including a deep stab wound to the left thigh which damaged the major blood vessels in the leg.

“This caused profound bleeding from which his body was unable to recover and he died in the early hours of the following day.”

Mr Rees said the attack on the Haydens was a ‘fast moving and shocking event’ witnessed by neighbouring residents in Romford, east London.

Roome and Hinds, who were 19 at the time, are on trial charged with the murder of Ricky Hayden and the attempted murder of his father.

Roome, also known as Aaron, and Hinds, nicknamed Ghost, deny all the charges. 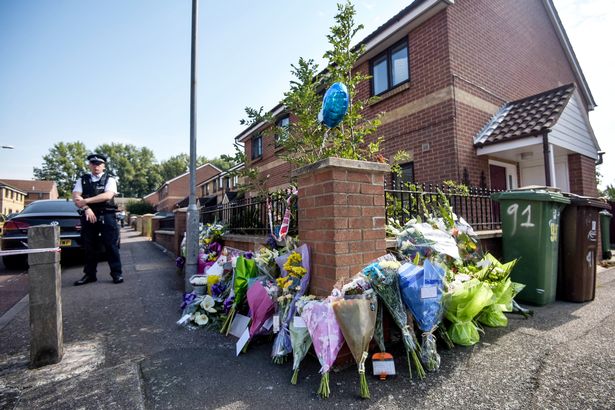 Flowers at the scene (Photo: SWNS)

A third defendant, Kevin Malamba, 20, of Southwark, south London, has previously admitted perverting the course of justice, jurors were told.

Mr Rees told the jury that the defendants had gone to Gibbfield Close that day to look for two other brothers – Carter and Latham Jordan – with whom Roome was involved in an ongoing dispute.

Roome, of Chadwell Heath, east London, and Hinds, of Chigwell, east London, were on a moped while Malamba and another young man followed on mountain bikes, the court heard.

Mr Rees said: “As it turned out, their trip to Gibbfield Close resulted in a violent confrontation, not with the Jordans but with a different pair of brothers, Ricky and Perry Hayden and their father Paul.

“It appears that confrontation came about because the Haydens believed that Tommy Roome and Tarrell Hinds had designs on Perry Hayden’s moped which was parked directly outside the front door of the Haydens’ home address.

“The Haydens rushed outside to confront the men on the moped. They were dressed only in their boxer shorts in the early hours of the morning and they had nothing on their feet.

“Paul Hayden had picked up a baseball bat from just inside his front door.”

The court heard that, at the time of his death, Ricky Hayden and his brother were working for Havering Council and were living with their father, who suffers from arthritis, and their dog Roxy.