A major search has been launched for sunbathers potentially trapped after a cliff fall on the hottest June day in 40 years. Around 50,000 tonnes of chalk tumbled 80 metres into the sea at around 4pm yesterday at Seaford Head, near Eastbourne, East Sussex.

Crews from the Maritime and Coastguard Agency are now working to establish whether anyone is trapped under the cliff face.

The fire service has raced its rope rescue and technical rescue units to the scene.

A major hunt is underway to ensure no one was trapped when 50,000 tonnes of chalk toppled into the sea in East Sussex. IMAGE: [email protected]

There are currently no reports of any missing people in the area but a search is under way because of the “sheer scale” of the fall.

Sunseekers had flocked to the beach to enjoy the hottest June day in 40 years as temperatures soared to 33.9C.

Huge chunks of chalk smashed onto rocks below causing a massive cloud of dust.

Kaimes Beasley, Duty Controller for the UK Coastguard said: “We will continue to search this area until we are satisfied, along with the other emergency services involved, that no one has been injured or trapped in this fall.

“We are advising beach goers to keep away from the scene and we are currently cordoning off the area in the interests of public safety.

“I cannot stress enough that this rock fall clearly shows how unstable cliff edges can be, so please keep your distance from cliff edges, at both the top and the bottom of the cliffs, at all times.” 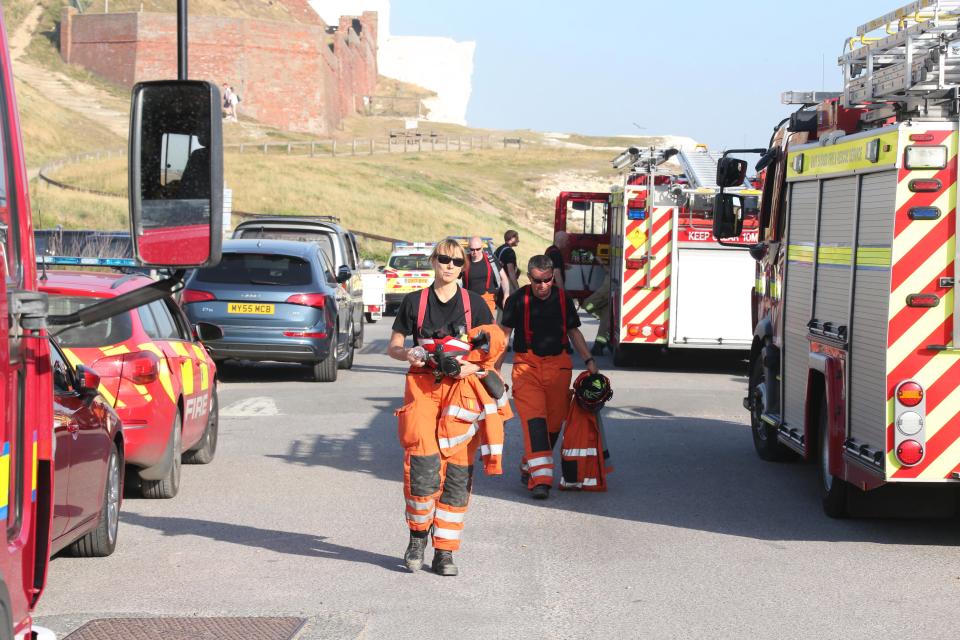 Emergency services on the scene of the cliff collapse. IMAGE: [email protected]

A couple were earlier seen recklessly taking selfies on top of the cliff which had fallen into the sea just an hour before.

Witnesses claimed massive clouds of white dust were sent billowing into the air after the cliff collapsed.

Vitalea Coleone told the BBC: “As I was swimming I saw huge amounts of what I thought was smoke. We thought something had gone into the rocks.

“I got out of the water because I didn’t know what it was. It was just like someone had let a smoke machine off.”

A large crack appeared in the cliff face at Seaford Head in 2014.