Two men have died after a crane collapsed on a construction site in Crewe , police have confirmed.

Another man, believed to be the crane driver, was taken to Royal Stoke Hospital with serious injuries, which Cheshire Police said were not thought to be life threatening.

The first 999 calls were made at around 4.30pm today alerting the fire service and police to what was handled by ‘major incident’ units.

One nearby resident reported seeing the crane “at a tilt” on a new build site adjacent to Bombardier Transport on Dunwoody Way before it collapsed, the Crewe Chronicle reports.

Cheshire Fire and Rescue Service said it happened on Dunwoody Way near a branch of Morrison’s supermarket and the Phoenix Leisure Park, which includes an Odeon cinema and Mecca Bingo.

The occupants of a house damaged by the falling crane were not injured.

Chief Superintendent Matt Welsted said: “This is a truly tragic incident, and our deepest condolences go out to the families affected at this extremely difficult time. 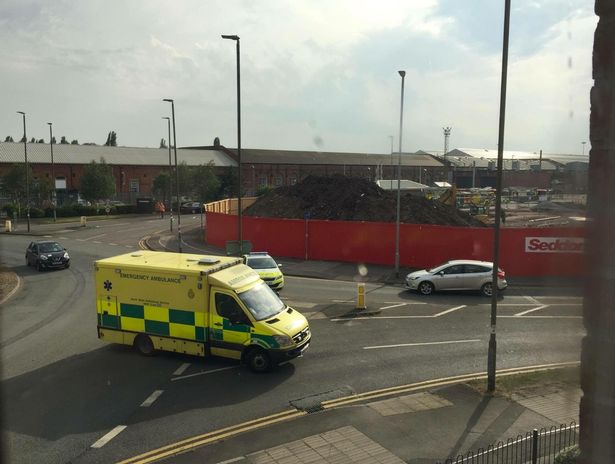 An ambulance at the scene of a crane collapse in Crewe –
(Photo: @ChronLPalin / Twitter)

“This is a multi-agency operation and we are working closely with the Health and Safety Executive, Local Authority, and Building Control to establish the full circumstances of the incident, however I would like to reassure members of the public that nobody else is at risk.

“A residential property has been damaged as a result of the incident, the occupants were not injured and were checked over by medical professionals.

“They Have since been relocated while the investigation continues.

“The bodies of those who have sadly lost their lives will shortly be recovered from the scene.

“I would ask that anybody who may have any footage of the scene, to please respect the families of those involved.

“Any footage that you believe could help officers with their inquiries, please send to our public contact email to allow us to effectively investigate the incident.”

The Manchester Evening News reports that a man working nearby said he’s heard reports of a ‘major incident’.

He reported ‘a lot’ of police, emergency services and other first responders making their way to the scene.

“People are just saying that something major has happened and it’s not looking good,” he said.

The Crewe Chronicle reports that one fire engine from Crewe and one from Winsford have been sent to the incident, along with the major incident unit.

By 6pm the crane driver – understood to be one of the three – had been freed and airlifted to hospital by the air ambulance helicopter.

The other two remain trapped – but were later released and taken to hospital.

It is understood the crane collapsed on a site being used to build new homes.

The site was sold off by Bombardier Transportation 18 months ago for a residential development. North West Ambulance Service confirmed that it’s a ‘police led incident’.

Police have confirmed that the crane driver has already been airlifted to hospital.

A Cheshire Police spokeswoman said: “The Health and Safety Executive have been informed.”

Cheshire Fire and Rescue Service said a building inspector had been asked to attend the scene.