The match commander for South Yorkshire police during the Hillsborough disaster, has been charged with manslaughter by gross negligence of 95 men, women and children.

The families of those who died during the 1989 FA Cup semi-final gathered in Warrington today and broke into applause when the announcement was made this morning.

Charges will also be brought against five others, including former Chief Constable Norman Bettison who is charged with four offences of misconduct in public office, former South Yorkshire Police officers Donald Denton and Alan Foster, as well as force solicitor Peter Metcalf, are charged with doing acts with intent to pervert the course of justice, while former Sheffield Wednesday secretary Graham Mackrell is charged with three offences relating to health and safety at sports grounds.

Barry Devonside, whose son Christopher, 18, was killed in the disaster, pumped his fist as he emerged from the meeting with the lawyers and other relatives of the 96.

He said: “Everybody applauded when it was announced that the most senior police officer on that particular day will have charges presented to him.”

Evelyn McDonnell Mills, whose brother Peter McDonnell, 21, died in the disaster, said: “I’m really happy that we’ve finally got some charges after 28 years.

“I’m just sad that my brother Gerard, who campaigned for years, died in the first year of the new inquests and never got to see justice.”

Louise Brookes, whose brother Andrew died at Hillsborough, said: “There are a lot of mixed emotions because it’s another event where my parents haven’t been alive to see it or to hear it.

“It’s not just my parents, other Hillsborough family members have gone to their graves never seeing today.”

Hillsborough Family Support Group chairwoman Margaret Aspinall has said it is the “beginning of the end” after the Crown Prosecution Service announced six individuals would be charged in connection with the disaster. 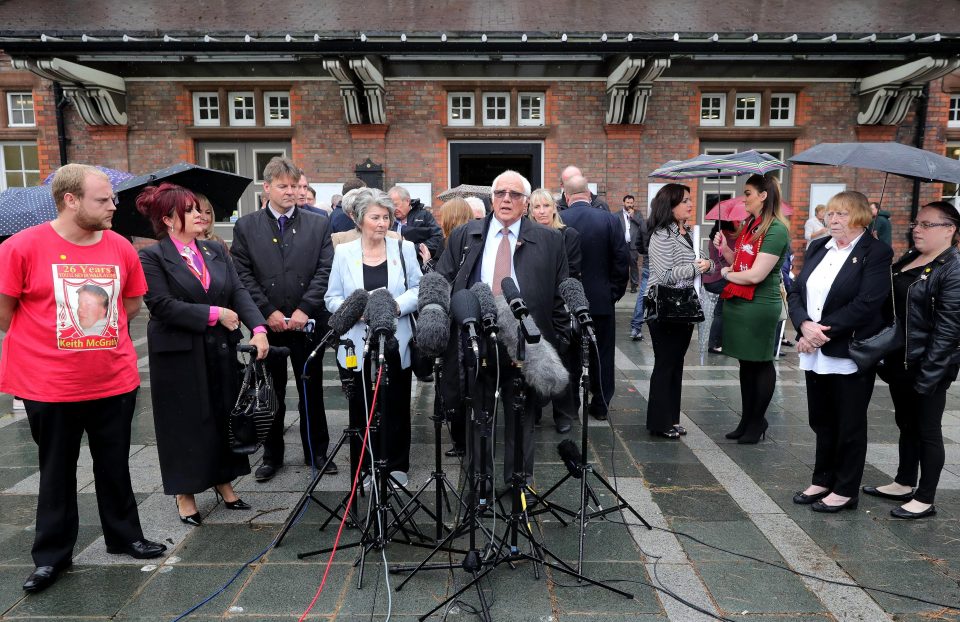 Speaking outside Parr Hall in Warrington, where the families were told the news, she said: “Every time we have been knocked down we have been determined to come back stronger.”

Trevor Hicks, whose daughters Sarah and Vicki died in the disaster at the 1989 FA Cup semi-final, said: “This is a success for society at large, not just for us.”

Sue Hemming, Head of the CPS Special Crime and Counter Terrorism Division, made the announcement to families of the deceased at a private meeting in Warrington this morning.

She said: “Following our careful review of the evidence, in accordance with the Code for Crown Prosecutors, I have decided that there is sufficient evidence to charge six individuals with criminal offences.

“Criminal proceedings have now commenced and the defendants have a right to a fair trial. It is extremely important that there should be no reporting, commentary or sharing of information online which could in any way prejudice these proceedings.”

Operation Resolve, which investigated the causes of the disaster, and the Independent Police Complaints Commission (IPCC) passed files of evidence relating to 23 suspects, including individuals and organisations, to the CPS earlier this year.