A young woman in her 20s was murdered in a busy shopping centre car park in Kent in front of shocked onlookers yesterday morning.

Witnesses heard the woman screaming for help as she was locked in a car at around 11 AM by an unnamed man who then slit her throat in what is believed to have been a domestic incident.

Police sealed off part of the car park near the Odeon cinema at Dockside outlet centre in Chatham Kent. Eyewitnesses spoke of seeing a woman’s leg hanging out of a car and a man fleeing, covered in blood. 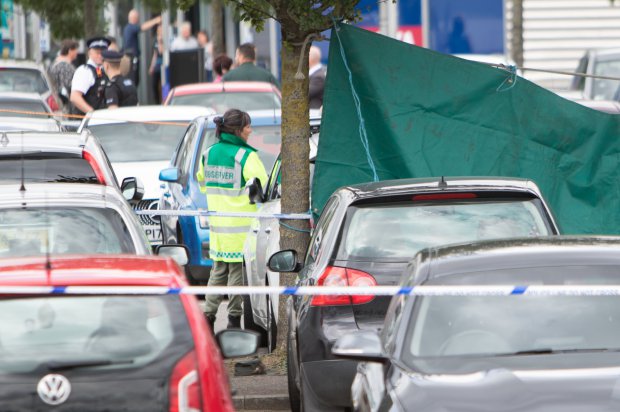 A man has been arrested after the attack (Picture: WENN)

The 25-year-old man from Rochester was arrested at the scene on suspicion of murder and is currently in custody.

Eye-witness Michelle Textall said: ‘I’m a bit shaken by what I’ve just seen. The attacker was leaning on the bonnet of police car in front.

‘His hands were covered in blood up to his elbows. Blood on t-shirt.

‘Attacker was early – mid 20’s, his white vest was blood splattered. He was then loaded into police van.

‘He didn’t seem to be resisting.’