Dozens of homes have been evacuated after flash floods hit Cornwall’s south coast.

Cornwall Fire and Rescue Service tweeted that crews were attending ‘multiple flooding-related incidents’ in Coverack and the surrounding area.

‘Major flooding in Coverack area,’ the post said. ‘Please avoid this area and do not attempt to drive through any flood water.’

Eyewitnesses also said the floods had broken up the main road that goes in and out of the village.

@BBCCornwall Live from Coverack. A disaster for this beautiful Cornish village. pic.twitter.com/WaekB1YdWi

The Met Office said the extreme weather had come after heavy thunderstorms and rain in Cornwall and Devon on Tuesday afternoon.

‘There has been some heavy rainfall around,’ Met Office forecaster Craig Snell said, adding that the worst has now moved north from the region.

One eyewitness said the wet weather hit Coverack at around lunchtime, but got significantly worse after 3pm. 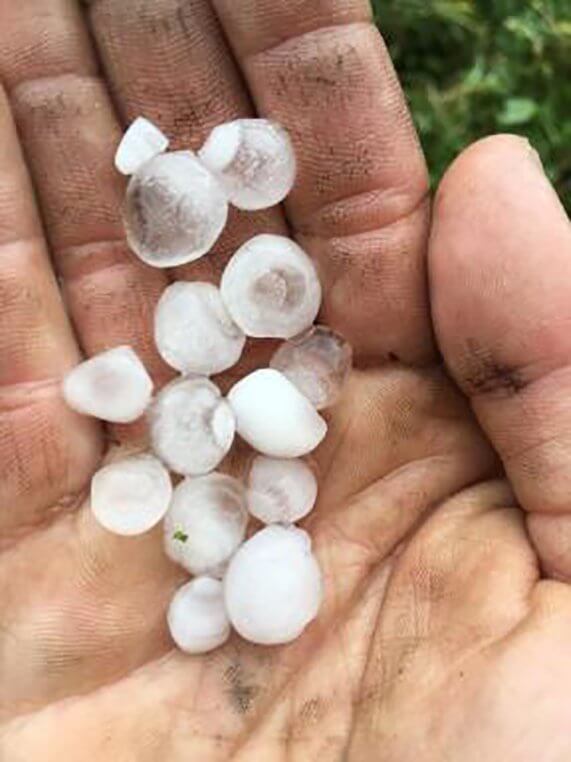 Wainwright, who works in the village’s Paris Hotel, said that hailstones the size of 50p pieces were smashing small panes of glass on the building.

‘It wasn’t until it cleared up at 4.30pm, and we could see over the other side of Coverack, and we could see the stream coming down the main road and going just straight off over the wall into the sea, that we realised how bad it had been and how much water and rain had come down.’

Two people had to be rescued by a coastguard helicopter, based in Newquay, a spokeswoman for the Maritime and Coastguard Agency confirmed.

‘Six people were in a house and two have been rescued from the house by helicopter,’ she said.

She said that there were no injuries, but she had no further details on the rescue.

One witness said that her neighbours had lost a shed in the floods.

‘It was quite horrendous,’ the local business owner, who didn’t want to be named, said.

‘It was torrential, the water that was coming down our road, but it’s all subsided, it’s much better now – except for the river itself is still quite a torrent.

‘But luckily nobody was hurt, anyway. I think the biggest sufferer is the main road into Coverack. I don’t think that is passable at the moment.

‘I have never seen such big hails. The sun was shining and the wind was blowing and it was hailing, all at the same time. It was quite amazing really.’