A baby was left with a scar from her eye to her ear after she was cut by a surgeon when she was born. Karmen Edwards was injured during a cesarean section delivery at Raignore Hospital, Inverness.

Her mother, Emma, has now hit out at the hospital after findings from an investigation were not disclosed to her family.

Miss Edwards said previously that her daughter’s birth had been a ‘disaster from the start to the end’.

The locum doctor who made the incision in Karmen’s head claimed she had not been told that Emma was in labour as she performed the procedure.

NHS Highland have now completed an internal investigation into the incident, which was revealed in September of last year.

The incident followed a series of upsetting delays to the section itself – and then the injured infant had to wait a day for a plastic surgeon to travel from Aberdeen to stitch her wound.

The case thrust into the spotlight concerns about a shake-up of maternity services in Caithness, which has forced pregnant mothers to make the 200-mile round trip to Inverness to give birth. 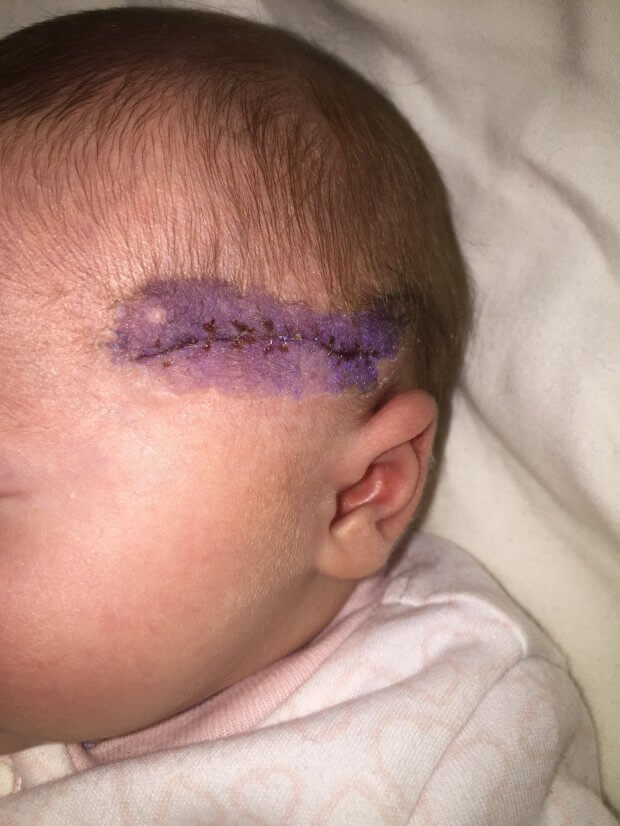 More than a year after Karmen was born, the health board has confirmed that it has concluded its investigation.

After NHS Highland released a statement, Miss Edwards, from Wick, Caithness, said: ‘I’ve not heard anything from them. They are not really admitting much.’

A series of changes have been made to the safety briefings surgeons hold before operating.

They include patient management programmes and a change to the way risks are reported and communicated between staff and parents at hospitals.

Granddad Robert Edwards, 62, from Wick, Caithness, says the whole family has been angered by the lack of communication from NHS Highland.

He said: ‘We’re totally disgusted about all of this. Nothing has been done about it and they have never got in touch with us.

‘They managed to release a statement to the press but haven’t got in touch with us in the days since.

‘We’re thinking about going to the solicitor because, with all the changes they’ve announced, they seem to be admitting they’re in the wrong.

‘The surgeon who did it was a locum employed by NHS Highland.

‘I don’t understand why they can’t send a locum up to here for at least a month. It would save a lot of stress for expectant mothers to have someone based up here.’
A spokesman for the health board said: ‘NHS Highland has conducted an internal investigation into this case.

‘We have adapted our surgical safety brief to cover obstetric specific cases and requested that Datix, our patient safety and risk management programme, include and link with clinical speciality leads when reporting is done.’

‘NHS Highland would encourage Ms Edwards to contact our feedback team so we can discuss her case and the findings of the investigation.’

Nicola Sinclair, a Wick councillor and health campaigner, said: ‘They should have been in touch with the parents that went through this.

‘It was a really terrible time for them and they absolutely should be getting back to her.’

Emma, then aged 21, was booked into Raigmore on Thursday, June 16 last year, because of the large size of her baby, but waited all day to be seen, before being told staff were too busy.

Having travelled down from Wick, the family stayed in Inverness but the same thing happened the next day.

They returned home and then travelled back to Inverness so Emma could have her baby on the Monday – but at 3am on Sunday her waters broke and she went to Raigmore.

After Karmen was born, hospital staff rushed her off to the special care baby unit because her head had been cut.

The surgeon spoke to Emma afterwards and said that it happened because she had not told anyone that her waters had broken and was in labour, but her medical records indicated that she had.

The cut on Karmen’s head was not stitched up until the following day because the hospital had to wait for a plastic surgeon to arrive from Aberdeen.