A mother and her son were killed in a pile-up along with a 53-year-old man after he stopped to check on a badger.

Laura Hopes, 32, and six year-old Alfie died in the crash on the A38 between Tideford and Landrake, Cornwall and nine others were injured.

Her four-year-old son Tommy remains in hospital in Bristol after being airlifted with serious head injuries.

Tony Woodman was killed by a vehicle travelling in the opposite direction when he got out of his car on July 9.

His fiancé Kim Gasson, 50, said: ‘We saw what looked like a cat or a dog – Tony loved dogs and he had to have his put down the day before, so we turned back to check.’

Tony was then knocked down on his way back to the car, starting the pile-up.

Kim added: ‘I could see him waking back. He was opposite me and looking back at me smiling and laughing as if to say it was a badger. I turned away to start the engine. 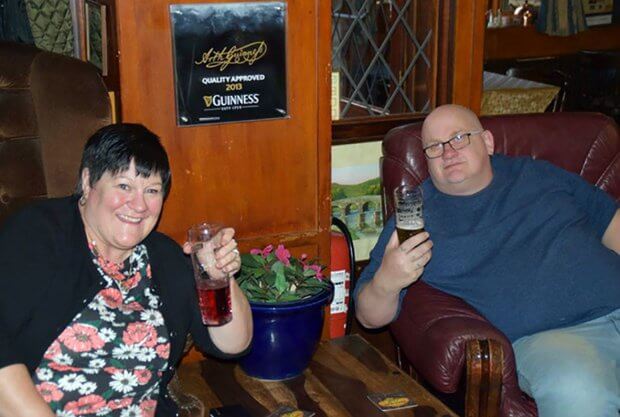 Tony Woodman – pictured with his fiancé Kim Gasson – was killed after he got out of his car (Picture: Wessex News Agency/ Jim Hardy)

‘There was a crunch first and then something flew at my car, like a piece of rubber, and everything had changed and Tony had gone. It was just a few seconds.’

Kim, from Plymouth, was due to marry Tony next month and they were meant to move into their new home two days ago.

She said: ‘He asked me on Valentine’s Day and I said yes. He loved the bones of me, I know that. He idolised me.

‘My whole life has changed. It was so quick.’

A crowdfunding page for the Hopes family, from Saltash, has been set up and so far raised more than £13,000.

A tribute said Laura was a ‘loving, kind and devoted mum’ and her husband Lee is devastated by the loss of her and Alfie.

He was described as a ‘happy and popular boy’ and a keen footballer, who played for Saltash United where his father was the coach.

The tribute said: ‘He loved Liverpool Football Club and was rarely seen without a football kit on and a ball at his feet.’