Two parents, who raised their children in an ‘uninhabitable home’ covered in urine, faeces and flies, have been jailed.

A mother in her thirties and a father in his forties both pleaded guilty to child neglect, as a court heard how the smell inside the property was so strong it made a police officer’s eyes ‘water’.

Newcastle Crown Court heard the couple both had jobs that meant they had hygiene and health and safety certificates.

But piles of clothes and rubbish were piled up in every room and the kitchen was full of rotting food.

The two children, both under 16, have been left with long term issues, including learning difficulties, as a result of their treatment. 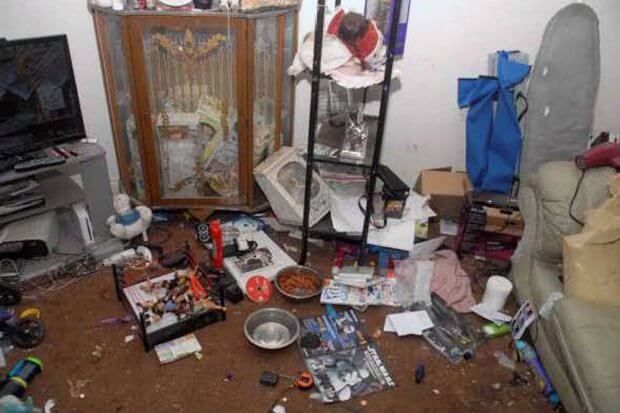 The couple have been jailed for two years (Picture: North News)

And their heads had been crawling with lice for at least two years.

Retelling a police officer’s account of his visit to the home in North Tyneside Prosecutor Daniel Penman told the court: ‘He described an overwhelming smell of urine and rotting food from the kitchen.

‘The carpet in the hall was thick with dog hair, such that its original colour could not be determined.

‘The downstairs toilet was heavily stained with faeces and there was faecal matter next to the toilet.

‘The smell was so strong it made his eyes water.

‘There was a lot of flies in the house.

‘He also inspected the kitchen and found it to be full of rotting food.

‘There was faeces on the floor and soiled men’s underwear.

‘In the living room, again, there was rotting food and faecal matter on the floor.’

The mother told police officers at the scene: ‘I did a bit of tidying up this morning.’ 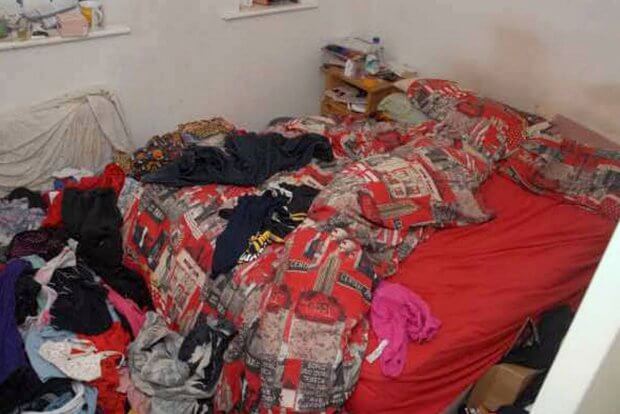 The mother told police officers she had cleaned in the morning (Picture: North News)

The first officer to arrive at the scene immediately took the children into protective custody when he saw their state.

Upsetting photographs reveal the extent of the squalor.

The woman admitted to the court she could not remember when the bathroom was last cleaned and accepted her kitchen facilities deserved to be ‘condemned’.

The father confessed his family home was a ‘pig sty’ and said they had lived like that for six months.

Sentencing the pair to two years in prison, Judge Stephen Earl said: ‘Frankly, how they managed to survive in your care is somewhat
in question.

‘It is appalling that you lived in this situation, never mind brought up children in it.

‘This is protracted neglect over a lengthy period of time.’