A £81,000 benefits cheat who claimed she was too disabled to walk more than a metre a minute was nailed by holiday snaps of her SNORKELLING.

Hoey, 58, claimed that degenerative arthritis and back problems meant that she could only walk a metre a minute, and couldn’t stretch her arms above her head.

She was caught out when pictures from her holiday in the Maldives to celebrate her 20th wedding anniversary to husband Michael were passed to the Department for Work and Pensions.

A court heard how she was also pictured on her knees altering her daughter’s wedding dress and bent over a pool table with a cue in her hand.

Inquiries also revealed that she was a member of a gym, and had been attending regular swimming and badminton lessons.

Despite claiming that her arthritis meant she was unable to work, she was employed full-time for PartsWorld, a car accessory supplier in Cannock, Staffs., for 17 years.

Hoey, of Tamworth, Staffs., was found guilty of misrepresenting her benefit claim between 2001 and 2015 and misusing an exemption pass for the M6 Toll Road between 2004 and 2015 at Stafford Crown Court on Friday.

Prosecutor Anthony Cartin said: “She had been working full time from 1997 in a desk job doing the exact thing – sitting for a long time in the same position – she said she could not do without pain.

“She has lied and exaggerated, cheating you, me and the public out of money from the public purse.

“You have some health issues but you exaggerated the impact on your daily life because you know what you have to say to get disability living allowance.”

Hoey told the court: “I have not been dishonest.

“My mobility has got worse. 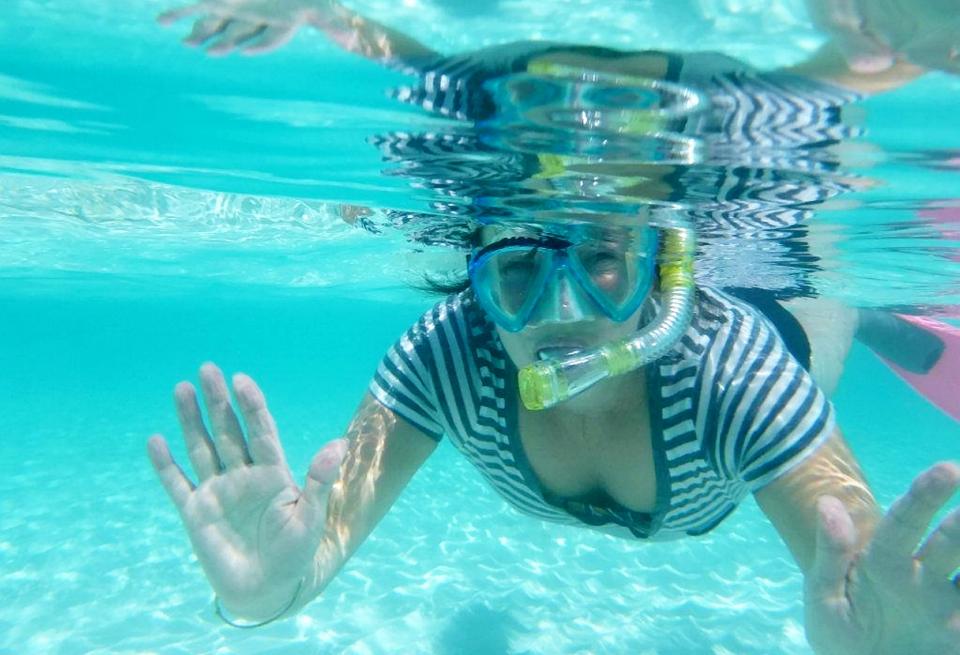 Linda Hoey was caught swindling benefits after this picture of her snorkelling on holiday to the Maldives emerged. IMAGE: SWNS

“I cannot walk without severe discomfort but perhaps I could have explained things a lot better on the forms I filled in.”

Stewart Halstead, Hoey’s former boss at PartsWorld – which she left in 2014 – said he was unaware of her claimed health problems.

He revealed that he had never seen her use her stick, and that she would regularly walk up and down stairs with trays of hot drinks.

The mum-of-four filed her first form claiming Disability Living Allowance in 1995, and successfully made an appeal for more money in April 2005.

But the scam finally ended when the DWP saw pictures of her scuba-diving in the sun-kissed Indian Ocean and stretching her hands above her head whilst lazing on a hammock in 2013.

The tell-tale pictures were found when police were in on her home on February 24 last year after the Department for Work and Pensions received a tip-off.

Officers spotted her walking down the stairs to answer the front door, and found that her home had not been adapted for her supposed disability.

Jurors were told how she regularly used the M6 Toll for free as she was on the highest mobility element of the allowance, and regularly got an updated car free of charge.

Her husband became her official carer after he gave up his job to launch a business from their home.

The pair enjoyed holidays in Egypt in 2012 and in the Maldives in 2013 to celebrate their wedding anniversary.

She was bailed and ordered to return to court in September for sentencing.

A DWP spokesman said: “Only a small minority of people try to cheat the benefits system, but cases like this show how we are rooting out those who are stealing taxpayers’ money and diverting it away from the people who really need it.”

“Midland Expressway Limited finds it completely unacceptable for anyone to take part in any fraudulent activity, whether involving the M6 Toll or not, and we will continue to fully support the DWP in such matters.”