A man dug up his own grandmother 15 years after she died because he wanted to sell her jewelery.

The horror discovery shocked her family even before they knew one of their own was repsonsible.

Police in Kentucky said it was a shameful offence.

George Jude, Emily’s grandson-in-law, told local Kentucky news channel WSAZ that initially, they had no idea who would commit such a disrespectful act.

He said: “It hurt the family very much. They really weren’t expecting it to be part of the family that did it.”

It was a tip off that led officers to the men said to have turned grave robbers.

The sheriff’s department says the two have apparently confessed to the act.

They said they were trying to get into the coffin, in Stacy’s Cemetery, Martin County, believing they’d find jewellery they could sell.

They believed a fortune in gems had been buried with Emily – something the family has categorically denied.

“They had to be in a bad mindset,” Mr Jude told the news station. 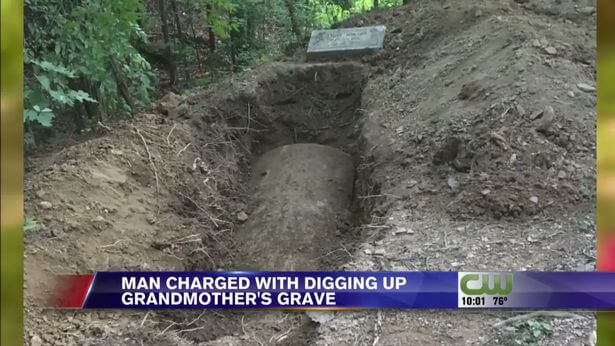 The earth at the top of the coffin had been removed

“Anybody in their right mind I don’t think would’ve been up there digging out a grave. They put in a lot of work. It’s crazy.”

Mr Jude says James has had ongoing problems, but they never imagined he’d go to these lengths.

“The family talked about it,” Jude said. ” Drugs are just another tool the devil uses to lure people in. They’ll do anything.”

Both men have been charged with violating a grave.

Investigators say the suspects had tried to break into the coffin but were unsuccessful.

Oda Howard, James’s father and Emily’s son, said: “He needs to get his issues straightened out.”

And he added before knowing it was his own son: “It’s hard enough to go through a funeral, but then 15 years later to have somebody come and dig your mother up, that’s despicable.

“It’s hard. That’s your family. Nobody wants to come up here for that. Nobody should have to.”

The grave rob attempt was spotted by a visitor to the cemetery.