Bullies left a nine-year-old autistic boy with a nail impaled in his head.

Romeo Smith was strolling behind his mum and dad when a 20cm-long plank of wood was lobbed at his head on Sunday August 6.

He was rushed to hospital by his parents and had to wait in A&E with the batten still attached to his skull.

Romeo has described how he feared the worst after the cruel attack. He said: ‘It was a very scary experience. When they threw the plank I could feel it stick in the back of my head.

‘That was the scariest part. I thought that I was dying.’

Mum Natasha Smith, 30, said: ‘It was terrible. He was sat there waiting with a plank of wood sticking to his head – like something out of a horror film.

‘It is always hard to tell what Romeo is feeling due to his condition. But he was really traumatised at the time – not knowing what was happening and having a plank of wood and a nail sticking to his head.’

The incident happened as the family, of Mansfield, walked home from Romeo’s grandmother’s house.

Natasha’s husband Craig, 35, found Romeo trapped up a tree by three boys who were brandishing sticks and calling him names.

As Craig approached Romeo came down from his perch but as the pair walked away one of the boys picked up the plank and threw it. 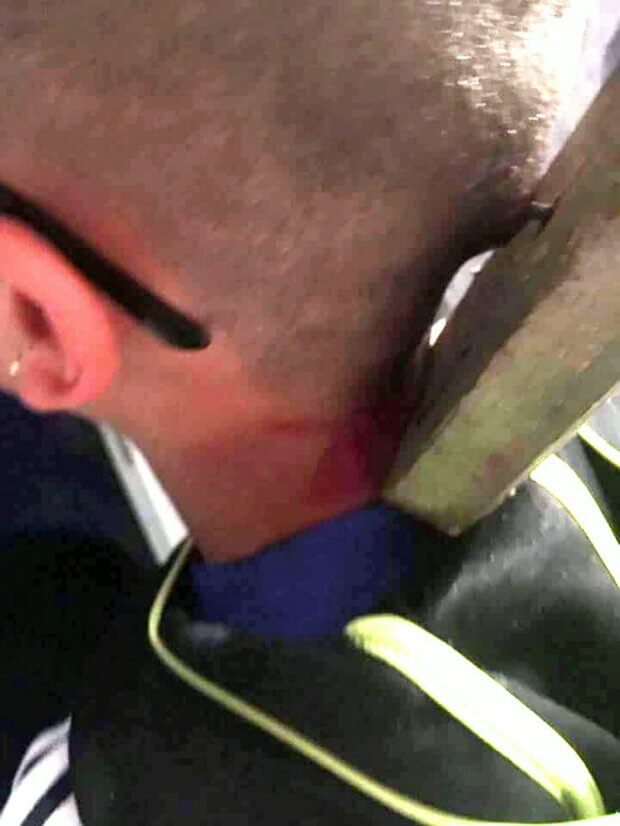 Romeo Smith with the 20cm-long plank of wood in his head (Picture: Ross Parry)

The nail pierced the skin at the back of Romeo’s head and Craig scooped him up in his arms and ran home to Natasha, who is a nurse.

Doctors gave Romeo morphine and removed the nail – which they said had actually hit his skull, causing it to bend.

He is now bandaged and recovering on a course of antibiotics at home with his parents and their three other children.

Natasha said: ‘It is horrible because these three boys were his friends and had been knocking round for him during the summer.

‘They are a couple of years older than him and probably found him vulnerable and an easy target,’ she said. ‘I have no idea how long the bullying has been going on but it is worrying that they have done this in front of an adult.’

Natasha said Romeo was now back to his normal self but she was heartbroken by the long-term effect the attack could have.

She said: ‘With autism everything is heightened so he was very anxious about it. We do not want these boys in trouble with the law because they are just kids.

‘But something needs to be done – this an example of how boredom during the summer holidays can go a bit far.’