A dog has been left with severe chemical burns after a suspected acid attack.

Jax was playing in the back garden when he was doused with a substance through panels in the fence.

His owners, from Salford were horrified when the Staffordshire Bull Terrier returned from the garden with clumps of his fur falling out.

Their two-year-old pet also had liquid trickling down his back and a nasty injury to his neck.

Jax was rushed to the vets, where he was diagnosed with a chemical burn.

The dog has now returned home to Little Hulton with his owners Stephen Myers and partner Sarah Bedford, who say he’s too scared to go in the garden. 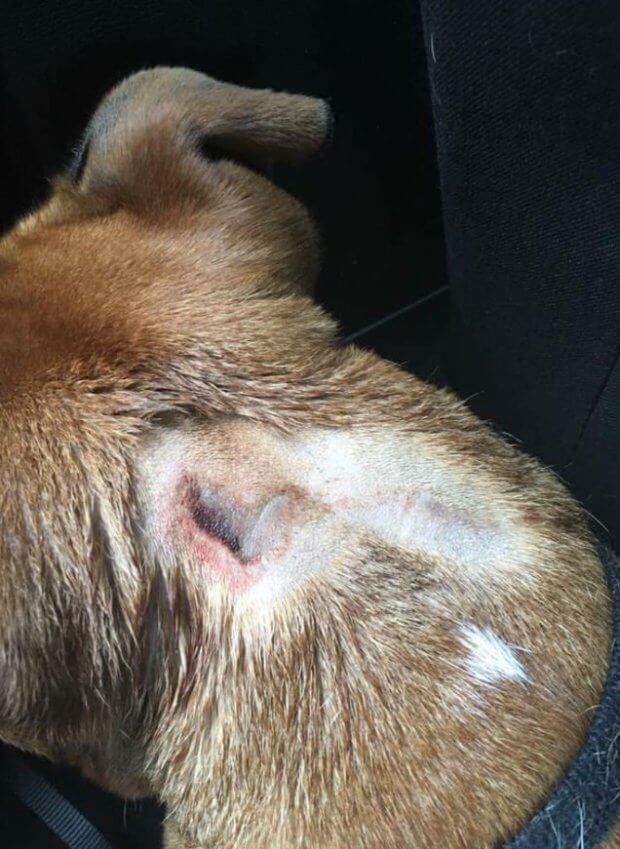 Jax has been left with nasty burns (Picture: MEN)

The couple’s children, aged five and four, were playing in the garden just minutes before the incident.

Vets were unable to determine which chemical was used to spray the dog, but it’s believed to have been some sort of acid.

Stephen, 31, said: ‘It has burned him as if it was sprayed through a water bottle.

‘We took him to the vets straight away and they said he had some sort of chemical burn.

‘He is fine, being a bit sheepish, he won’t go out in the garden now.’

Stephen, a sales worker, added: ‘I have got four children, three were playing in the garden five minutes before.

‘They are not allowed in the back garden now.

‘They don’t know what happened, just that somebody has hurt the dog.’

The couple reported the incident and anyone with information is asked to call the police on 101 – or Crimestoppers, anonymously, on 0800 555 111.

< Prev StoryBride To Be Saves A Seat At Wedding For Her Son Who Passed Away... Who Show…