A black panther has been spotted stalking along a golf course fairway.

Businessman Mark Robinson caught the mysterious beast on camera yesterday afternoon as it appeared to head towards two people sat under a tree.

Mark, who was enjoying a round with his business partner, told the Huddersfield Daily Examiner: “We saw what looked like a big black panther walking away from us. It looked to be stalking something, like a cat would.

“There had a slowness to its movements that distinguished it from being a dog. It was very distinctive and had a huge tail.

“We whistled at it to attract its attention. It turned round and you could see it had pointed ears. It went low on its haunches and then shot off into the bushes at speed.”

Mark, from Hepworth, West Yorks, estimated he was 60 to 70 yards from the animal when he took the pictures, adding: “We were not in any rush to get closer.”

Staff at Huddersfield Golf Club are now probing the sighting. 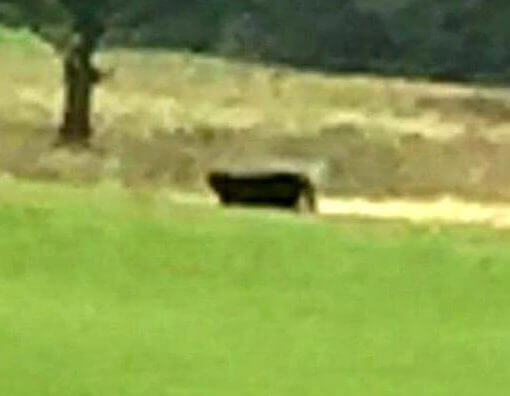 The beast fled after its attention was attracted by a whistle

Club professional Alex Keighley said: “We are investigating it. There’s a greens meeting tonight where it will be discussed. We are telling people going out on the course to be vigilant.”

It comes as a terrified mum has claimed she is “too scared to leave the house” after she spotted a black panther stalking through a dog-walking beauty spot.

Mum-of-three Emma Adam from Ashby in Leicestershire said she was out walking with her mother-in-law at dusk on Saturday after a barbecue when she saw the animal.

The 29-year-old alleges she saw the creature near Moria Road in Asby, which is a popular area with dog walkers.

Emma claims the animal was black and long, and was so thin that it looked malnourished, with very prominent shoulder blades.

She said she froze when she saw the animal and she and her mother-in-law both started to walk backwards.

Emma added: “People were saying why didn’t you take a picture of it, but in that moment you are too frightened to take a picture.

I always thought they would be very stocky, but this was much thinner.