Someone sick deliberately attacked a helpless dog and slashed open her belly as she was happily playing outside.

Courtney Cartledge, 18, has claimed two-year-old Sage was attacked as she played in the front garden of their home in Musselburgh, Scotland.

The teenager says the Labrador cross has been left too scared to go outside since the cruel, targeted attack on Thursday August 10.

Vets confirmed the cut, which peeled the flesh from the wound and exposed the muscle beneath, had not been an accident but was most likely deliberately carried out by someone with a knife or blade.

Customer service assistant Courtney said: ‘I was in shock and to be honest I still am. The cut was around eight inches long and was really deep.

‘It was so deep that the flesh was actually hanging off.’ 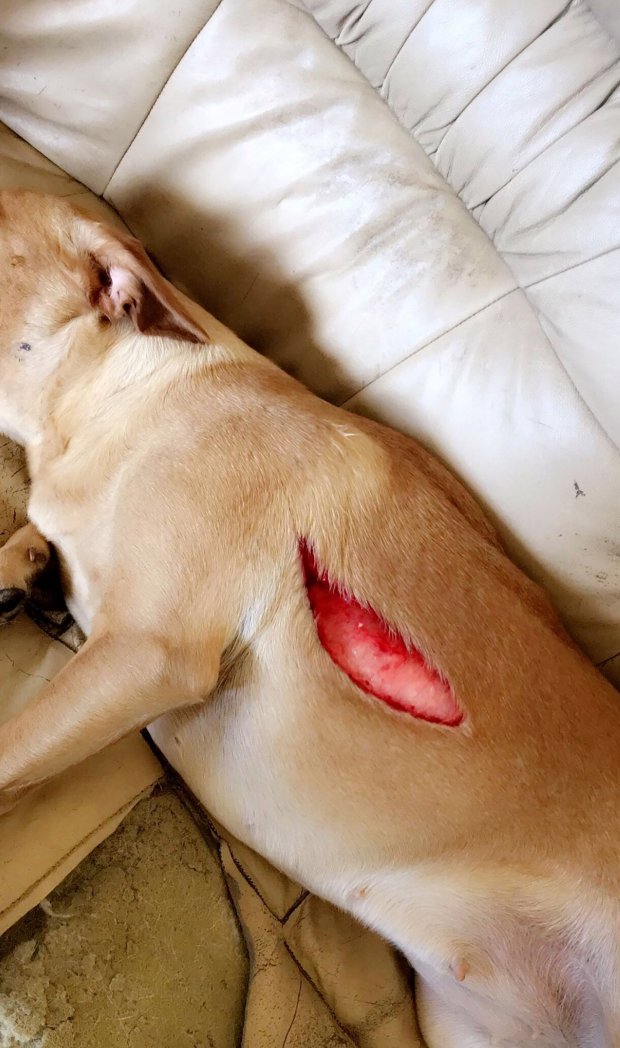 Vets believe it was a targeted attack (Picture: Mercury Press)

Since the attack Courtney said Sage has been nervous about leaving the house.

She added: ‘Sage is still in quite a lot of pain, she is on pain killers but we have had to up her dosage as she was really struggling with the pain.

‘It is worrying as whoever did this just did it to a random dog on the street.

‘They could quite easily do it to another animal. Thankfully no other animals on our road have been hurt, but it doesn’t mean they won’t do it again.’

A spokesperson for Police Scotland said: ‘Police are investigating after a dog suffered an injury to its body whilst in a garden in the Pinkie area of Musselburgh on Thursday August 10.

‘Officers from Musselburgh Police Station want to speak to anyone who was in the area at the time and may have seen or heard anything suspicious, contact Police Scotland.’