A dog owner has spoken of her outrage after she says her beloved pet dog was badly cut during a routine trim.

Kirsty Boyd said her sprocker spaniel Bailey was treated with two loose staples, with the 24-year-old slamming the pet shop’s handling of the situation.

Kirsty said: “[After the call from the groomers] I went straight down there. I thought maybe it was an old cut and they had just noticed it or slightly caught it.

“I was expecting a small scratch when I got there, I wasn’t told that he had staples put in his ear or that he had an open wound over the phone.

“I was so shocked. He looked like a pirate with earrings in.

“To me the staples didn’t look right. Bailey’s wound was still open. 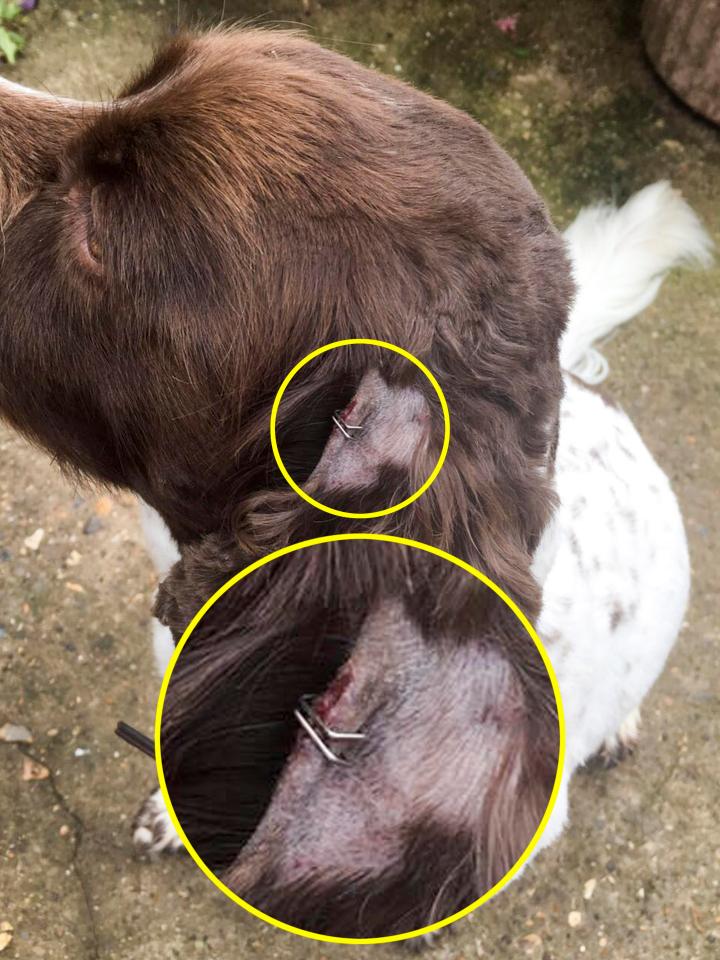 Bailey had several staples put in his ear after it was cut during a routine trim. IMAGE: MERCURY PRESS

“I did start to get irate when I got to the veterinary clinic as they had started to talk about antibiotics and I wanted to know who was going to pay for them as this wasn’t my fault.

“All I did was take my dog to be groomed and he ended up with two staples in his ear.”

The young woman said the groom room Pets At Home in Brunel Retail Park, Reading, had at first offered her a 25 per cent discount for the grooming on August 21.

She said: “They knocked 25 per cent off but I still didn’t think that was acceptable at all.

“Thankfully, they have reimbursed the money for the grooming and have agreed to pay for the antibiotics but we shouldn’t have been charged for them in the first place.

“He came home with a dodgy ear piercing and I had to pay for the pleasure.”

She said she would not be returning to the vets, adding: “He is groomed about three or four times a year professionally and no one has ever managed to cut him before.”

She said the dog had the staples removed from her regular vet the next day.

A spokesperson for Pets At Home said: “We were sorry to hear that Bailey’s ear was cut during his recent groom and needed veterinary attention. Our groomers are all highly trained and take great care of the dogs in the Groom Room. However, very occasionally, a sudden movement may result in an accidental nick or cut.

“Having a vet on site meant that Bailey received prompt veterinary attention and the cut was treated in line with established veterinary protocols. Although Bailey appeared untroubled by the procedure, the vet advised that a cone would be needed if he started scratching.

“We have refunded the full cost of the groom and will cover the cost of Bailey’s veterinary treatment. We have also provided a new bed together with some toys and treats so Bailey will be comfortable while his ear heals completely.”