A Cambridge University student who sparked fury for burning a £20 note in front of a homeless man will not be expelled, it was revealed yesterday.

The university came under pressure to expel student Ronald Coyne after a video of him taunting the homeless man while dressed in a bow tie and coat-tails went viral.

But he kept his place at Pembroke College after writing a public apology saying he had been threatened with chemical attacks after he ‘forgot what it really meant to study at Cambridge’.

He was promptly expelled from the Cambridge University Conservative Association after his disgraceful behaviour in the early hours of February 2 caused a national furore.

It was likened to the initiation rites of Oxford University’s notorious Bullingdon Club attended by Boris Johnson and ex-PM David Cameron.

But bosses at the historic university have repeatedly refused to confirm or deny if disciplinary action would be taken against the first-year student.

Now Mr Coyne’s college has shared his letter of apology to its students in a bid to ‘generate support for Ronald as he prepares to return to College.’ 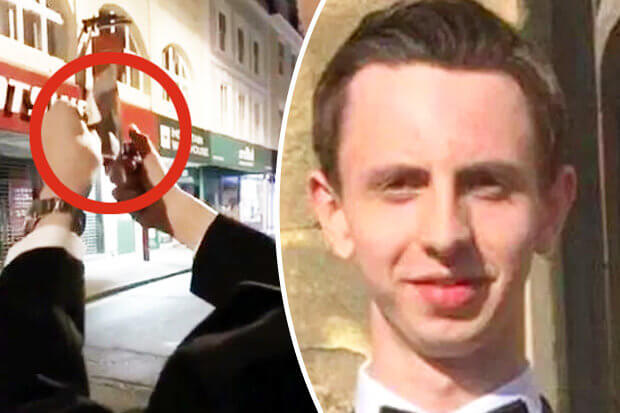 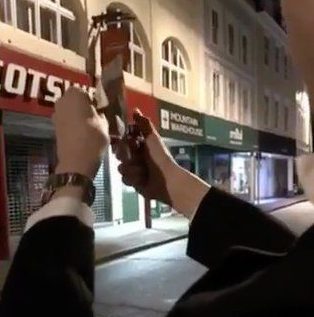 It stated: ‘My experience of Cambridge was of a place which is positive, accepting, and friendly. Yet on that evening, I forgot what it really meant to study at Cambridge. I misrepresented what it meant to be a student here.

‘When the media commentary flared up, strangers sent piles of abusive mail to my family home threatening me with violence, and chemical attacks.

‘I have addressed the root causes of my behaviour by attending awareness classes, relating to both alcohol and social inclusion.

‘Until now, there had been an ongoing disciplinary process on a university and college level which had meant I couldn’t respond publicly. Now that these processes have concluded, I am setting out to try to remedy some of the hurt caused by my actions.’

His mother Sandra McLaughlin previously said she could not understand her son’s behaviour.

She said: ‘I don’t recognise that behaviour in my son. I don’t really know why he’s done something so thoughtless and cruel.

‘It’s completely out of character. He did two years of volunteering at Stockbridge shelter homeless shop in Edinburgh when he was still at school.