Who says romance is dead? A Tinder date ended with the unforgettable spectacle of a young woman stuck upside-down in a window, trying to grab her own poo.

The unnamed – but athletic – girl ended up upside down inside the window after making a valiant effort to get rid of a massive poo she’d done which had blocked the bog.

Why not just break it up with the toilet brush, like any sane person?

The unnamed girl had been for a romantic meal at Nando’s with student Liam Smyth, 24, before they went back to his place for a nightcap.

But a bizarre chain of events unfolded after she went to the toilet and blocked the pan. 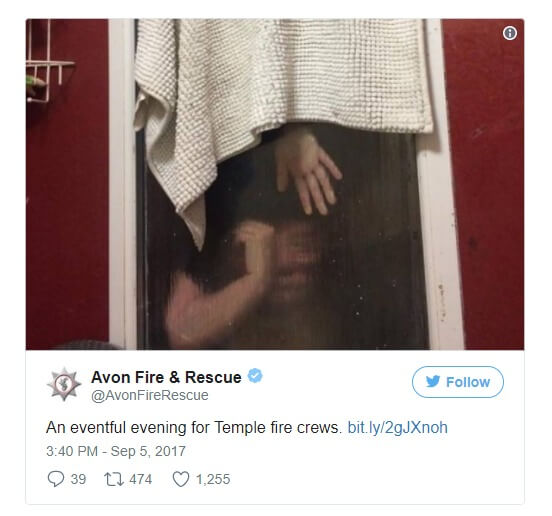 In panic, she picked up the stool and threw it out the window – but it fell down into a narrow gap.

She had no choice but to confess to Liam, who bravely helped lower her out of the bathroom window into the gap between the houses in an attempt to retrieve it.

But she got wedged upside down and eventually had to be rescued by firefighters who were called to Liam’s house in Bristol.

He has now launched a GoFundMe page to replace the broken window – which raised £300 in the first three hours.

Liam said, ‘Being an amateur gymnast, she was convinced that she could reach into the window and pull the poo out, using the tried and tested “inside out bag as glove” technique.

‘Unfortunately she couldn’t reach. She climbed further in and had the same problem. Eventually I agreed to give her a boost up and into the window.