You would think the toilet was a safe space, where you could sit for a moment in your day without being bothered by a three foot snake.

Unfortunately, for a small boy in Essex, that did not turn out to be the case.

When he lifted the lid, he was horrified to see a coiled reptile looking back at him, beady eyes aligned with the rim while its tail stretched back into the pipe.

‘He was frantic, and shaking, and I could tell something was wrong, but that was not what I expected,’ Laura Cowell said of the moment which will probably be the start of a lifetime phobia for her son, aged five.

She said the toilet had been blocked for a few days, but the family had no idea of the nature of the blockage, the BBC reports. 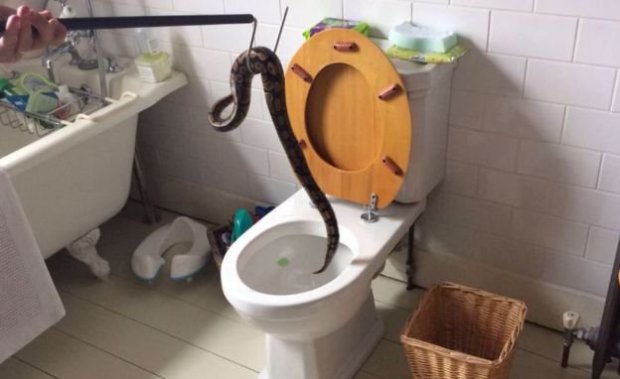 When it came out it smelled ‘toilety’ and a bit like bleach (Picture: Laura Cowell)

Laura, from Southend, was so scared she put weights on the toilet lid for several days to stop any repeat of the experience, even after the snake was removed.

‘I had to use a broom handle to lift the lid, then out popped its head and its tongue came out as well,’ she said.

A specialist from Scales and Fangs pet shop came to rescue the 3ft baby royal python.

It ‘most likely came up the u-bend’, Ethan Pinion, from the shop, said.

Neighbours had thrown away an old vivarium and it is believed to have escaped and got into the sewer system. Sweet dreams…