An 82-year-old man was preyed upon and attacked by a gang of three men who pinned him down in a violent robbery before ripping his jewellery from him. Ahmet Dobran was walking along Sussex Road in Newham, East London, when he was attacked by the group in August.

Now police have released pictures of his attackers as they appeal for information leading to the arrests of the three suspects. Mr Dobran, who already has Parkinson’s and was receiving cancer treatment at the time, suffered three fractures to his vertebrae.

That injury was suffered when one of the thugs grabbed him by the neck while another rained blows on his back and his arms. After forcing him to the ground they took his gold bracelet and Longine watch before running off.

His son and daughter said: ‘We are all devastated by it all. This attack has taken his independence away. Our father is not an indoor person, and now he will be stuck in doors for the rest of his life. 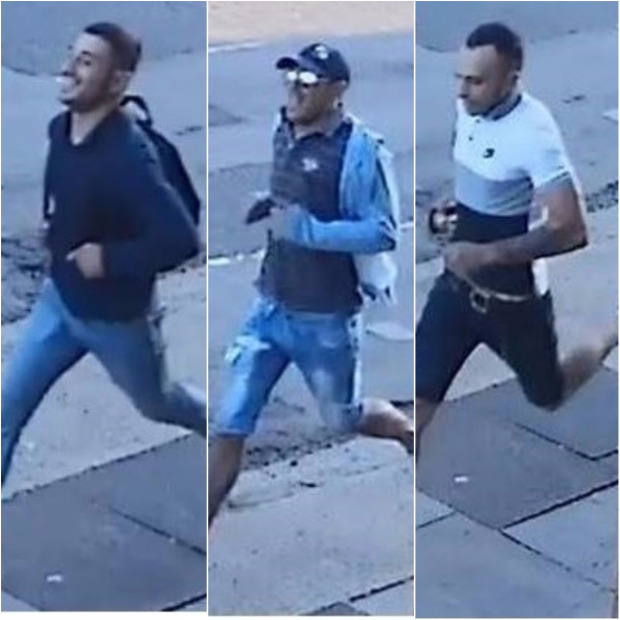 We are appalled at how someone can do this to an old man. ‘He is now unable to fly to Cyprus to see the rest of his family, he used to go there a couple of times a year. ‘Can someone please come forward with information regarding who done this to our father, someone knows who they are. The people who did this could do this to someone else, with no guilty conscience.’

PC Sam Bush said: ‘How three grown men can be so vicious in attacking and robbing an 82-year-old man with a walking stick is beyond comprehension.

‘Over the past month, Mr Dobran has been in and out of an induced coma, and he is now on a high dependency ward in hospital. He needs breathing apparatus, which includes a tracheotomy.

Doctors are not sure if this is permanent or temporary. ‘The men still have not been identified, and I believe that they are not local to the area of East Ham, or even Newham.

‘Someone knows who the suspects are we need to catch them before they target anyone else, as they clearly have utter disregard for their victims and do not hesitate to use violence.’

Anyone who recognises the men pictured is urged to call police on 101 or Crimestoppers anonymously via 0800 555 111. You can also Tweet information to police @MetCC.