A pensioner has been reunited with his life savings after taxi driver realised he had been scammed. Barry Stone got a phone call by someone saying they were from Scotland Yard investigating bank fraud.

They told him to withdraw £12,000 – £8,000 in £50 notes and £4,128 worth of euros – and hand it over to taxi driver Izy Rashid who would take it to London. But Mr Rashid, who works for Neales of Marlow, believed that something was wrong and returned to Mr Stone’s home to reunite him with his cash.

Mr Stone said: ‘I didn’t sleep afterwards and I couldn’t eat at all, it was such a lot of money. I feel so relieved now, I can have something to eat no, no problem. I’m very, very relieved. Speaking about the scammers he added: ‘You just believe them sometimes, don’t you? You think you’re helping people out.

‘They say they want the money because it’s got fingerprints on it and it’s somebody at the bank, they might be able to catch them and you believe them. However, never again. ‘It makes me look so foolish.

I was rushing about, I went for my flu jab, came back at about 1.30pm. I hadn’t had anything to eat and then you think the police are phoning, you don’t register.’

After contacting police, Mr Rashid returned to Mr Stone’s home and gave him back his money. Speaking about Mr Rashid he said: ‘He’s a wonderful man and friend now, a very, very good friend.

‘I’ll start using his taxis now. I’m going away in a few weeks time and flying from Heathrow so I’ll make sure I use him then. ‘I’m really angry that people can do something like that though, rob you and take your money – targeting old people as well.

‘How can they do that? I was brought up to respect my elders so I’d never, ever dream of doing something like that.’ Mr Rashid said: ‘We got a phone call from somebody in London by the name of Gary to pick someone up in Marlow. 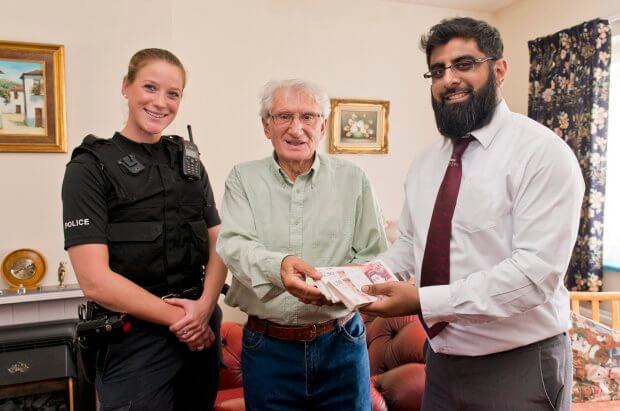 Mr Stone was given a police escort back to the bank to put the money where it should be (Picture: INS)

‘We thought it was a bit suspicious because when we got there he (Mr Stone) just gave us a box. My colleague brought it back to the office but then I took it back to the gentleman.

‘At first he said “No, it’s aftershave for my son” because that’s what the scammers had told him to say. We later realised they had rung him, claiming to be from the Met Police. ‘They wanted him to go to his bank and get all the money out of his account and they would check the fingerprints of the money.

So he had taken it all out, put it in the box, and then they told him not to tell anyone what it was about.’ He added: ‘I don’t think I’m a hero. It’s just immoral to take somebody’s money, especially someone so old and fragile. ‘I’m just happy I was able to stop this man from losing his entire life savings, simple as that.

I’m certain that if we weren’t already aware of scams like this he would have lost all of that money. ‘It’s really sad that stuff like that goes on and I just hope this will help raise the awareness of these scams and make more people aware of what can happen.

‘It’s heartbreaking to think that without our intervention Mr Stone could have been left penniless.’

A spokesman for Thames Valley Police, which is investigating the courier scam, said: ‘We received a report of fraud at around 11am this on Thursday in relation to an incident of fraud which occurred at around 6pm on Wednesday in Marlow.

‘Officers are investigating the incident. There are no arrests at this stage. Anyone with any information is asked to call police on 101.’