A woman has been charged with murder after a toddler fell to its death from a sixth floor window in Bradford.

Gemma Procter, 23, was charged with the murder of Elliot Procter after witnesses said the toddler fell onto the cobbles, naked.

Locals desperately tried to help the tot but police said it was quickly apparent he had tragically died.

At the time of the arrest, Detective Superintendent Nick Wallen said: “This is clearly an extremely traumatic incident and specially trained officers are working to support the child’s family members and those who witnessed what took place.

“It is no exaggeration to say those who witnessed this incident will have been deeply traumatised by what they saw.” 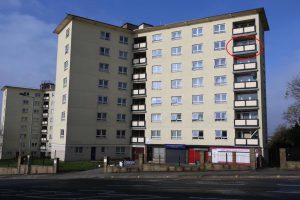 West Yorkshire Police said that the woman would appear before magistrates on Monday morning.

The woman, of Newcastle House, Bradford, will appear before Bradford magistrates charged with the October 21 murder.

Police released the names of both the charged woman and the infant victim.

Enquiries into the incident, which was reported to police at about 5.10pm on Saturday evening, remain ongoing by the Homicide and Major Enquiry Team.

Anyone with any information is asked to contact Bradford CID on 101.