Footage has been released of the moment that a car was deliberately driven into people outside a bar in South East London. The car hit a group of people outside Mekan Bar and Restaurant in Catford on September 16 at around 3am.

Earlier in the evening there had been a fight inside the bar involving the driver. Scotland Yard released the footage showing a man lying unconscious on the floor.

They said that there is further footage showing the car make several manoeuvres, deliberately targeting other people but they have not released the CCTV. When police arrived they were told that nothing had happened and no injured people were found at the scene.

Police said they had been alerted to the incident by council CCTV operators.

The Met Police said in a statement: ‘It was only some time after the event that the full details of the incident came to light, after officers who were conducting proactive patrols observed a vehicle and linked it – and its driver – as being involved in the attack on the night of 16 September.

‘When they reviewed the cctv footage they realised that a man had actually been run over – a potential offence of attempted murder – but that the victim had never come forward, and walked away from the scene.’

Police have issued pictures of a man they believe to be the victim who they want to speak to. Two women suffered bruising and went to hospital for treatment. 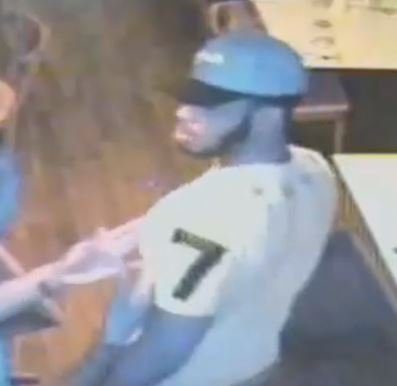 Police are hunting for this man who is believed to be the victim of the alleged hit and run (Picture: Metropolitan Police)

A man, aged 23, was arrested for attempted grievous bodily harm with intent on October 5 2017 and subsequently charged.

PC Gary Sanders, said: ‘This was a very serious incident which could have had fatal consequences for the man involved. We are very concerned about what has taken place and would urge the victim – and anyone else with information – to contact us as soon as possible.

‘We really need to hear from any members of the public or witnesses who were present that evening, either inside the club or outside the venue and who saw what happened.

Anything they tell us will be treated in complete confidentiality.’