Sir Michael Fallon has resigned as Defence Secretary as British politics is engulfed in a sexual harassment scandal. The Cabinet minister admitted his behaviour had ‘fallen short’ in the past, according to BBC Political Editor Laura Kuenssberg.

Sky’s Beth Rigby added that Theresa May’s reshuffle would be ‘coming sooner rather than later’. Announcing his decision, Fallon said: ‘In the past I have fallen below the high standards that we require of the armed forces that I have the honour to represent.’

The Tory veteran was caught up in the sexual harassment scandal sweeping Westminster earlier this week, when it emerged that he had repeatedly put his hand on a journalist’s knee during a party conference dinner in 2002.

The journalist, radio host Julia Hartley-Brewer, said that he kept doing it until she was forced to threaten to ‘punch him in the face’. However, she later said she had not regarded the incident as ‘anything but mildly amusing’, adding that she considered the matter closed.

Reacting to the news of Fallon’s resignation, Hartley-Brewer tweeted: ‘Bloody hell. Sir Michael Fallon has just resigned as Defence Secretary. #Kneegate (although I doubt my knee was the reason).’

According to ITV’s Robert Peston, sources claim that Hartley-Brewer was indeed not the only instance of ‘misbehaviour’ over the years. ‘Michael Fallon has resigned as defence secretary because he was aware that his behaviour with women over many years would be regarded as inappropriate if disclosed,’ Peston wrote on Facebook.

According to one of his friends, he found the stress of waiting for someone to make a complaint debilitating. And therefore – after a conversation with the Prime Minister this afternoon – he has quit. 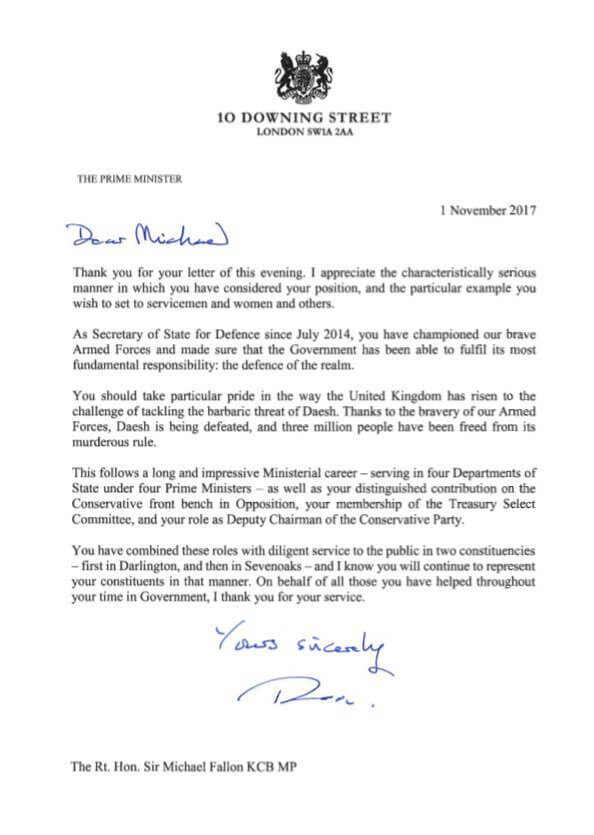 ‘He has said he wants to hold himself to the standards expected of the armed forces – for whom he is responsible. But several women Tory MPs say he fell short of the conduct they expect of all men.

‘In going expeditiously he has both helped and harmed the Prime Minister. ‘Those same women MPs admire her “decisive action”. But she dare not do more tomorrow than replace him rather than start the more ambitious reshuffle her party wants and expects – because she does not yet know which others of her ministers and MPs will be fatally tainted by allegations of abusive or harassing behaviour.’

Theresa May wrote to Fallon: ‘I appreciate the characteristically serious manner in which you have considered your position, and the particular example you wish to set to servicemen and women and others.’

She also told him to ‘take particular pride in the way the United Kingdom has risen to the challenge of tackling the barbaric threat of Daesh’. ‘Thanks to the bravery of our Armed Forces, Daesh is being defeated and three million people have been freed from its murderous rule,’ she said.

Earlier on Wednesday, the PM said action would be taken when there were allegations and evidence of sexual misconduct. ‘I am very clear that we will take action against those where there are allegations that we see, and the evidence is there, that there has been misconduct,’ she told MPs.