Distressing photos show how a dead Staffie was found shoved in a rucksack with its paws tied together with cables.

The dog was discovered wrapped in a child’s duvet and gaffe tape – deliberately placed deep in undergrowth in woods. He had bruising inside his mouth but it was not clear how he died, the RSPCA said.

The animal welfare organisation has launched an investigation following the gruesome discovery by a tree surgeon near Dibden Purlieu, Hampshire, on the edge of the New Forest. 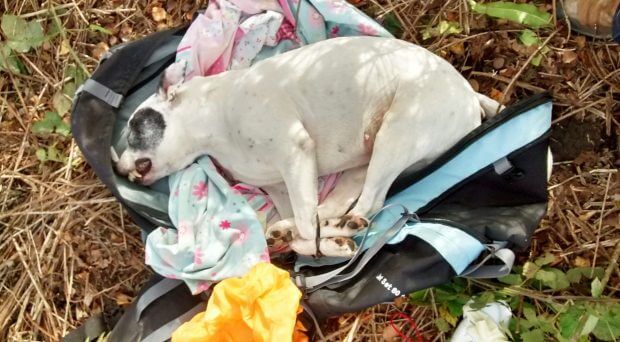 ‘He was in normal bodily condition with some scabbing around his groin area and bruising inside his mouth but it is not clear how he died. ‘I’d be interested to know where this dog has come from and how he ended up buried in a bag with his legs bound together.

‘If anyone recognises him, knows where he may have come from, or saw anything suspicious in the area when the body was dumped then I’d really like to hear from them.

‘Anyone with any information which could help our investigation should contact the RSPCA appeal line on 0300 123 8018.’ The male Staffordshire bull terrier was not microchipped so it has not been possible to find out where he came from, or who owned him before his death.