The ‘ghost’ of Carry On star Sid James has been captured on camera just yards from the stage where he died, a theatre lover has claimed.

Graham Lay was watching Mamma Mia in front row seats at Sunderland Empire last month when he snapped the supernatural sight during the interval.

The 48-yea-old says he captured an ‘erratic’ glowing white orb ricocheting around the orchestra pit and believes it was the spirit of the comedic actor who had a heart attack on the same stage 41 years ago.

Graham, from Sunderland, is adamant it wasn’t dust, an insect or a trick of the light.

He said: “It was really bizarre. I sat there and decided to take a picture as I’d never had seats right at the front before so hadn’t been able to see into the orchestra pit.

“As I was taking the picture I noticed these two balls of light flashing and moving really, really fast.

“It was very weird as you couldn’t see it with your naked eye, only through the camera, and they were moving in a way that wasn’t natural – nothing like a moth or any sort of insect. 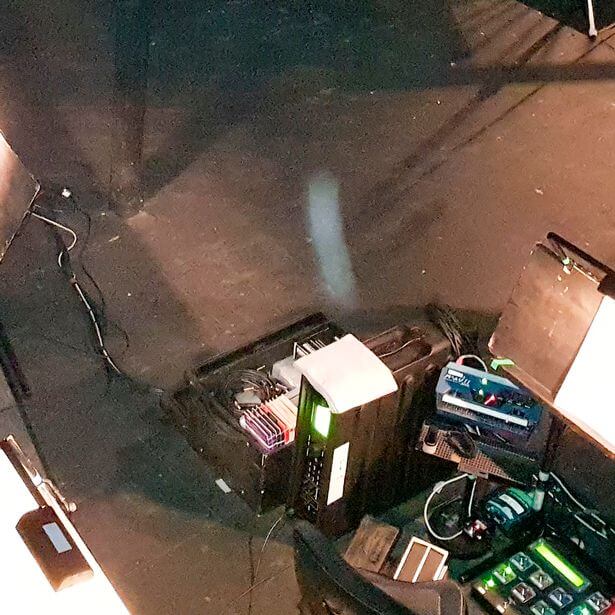 “It definitely wasn’t fluff or dust – there’s no logical reason.”

The NHS worker admits he was a ‘sceptic’ but claims the photo has changed his mind.

“I’m quite sceptical but the experience has changed my mind set,” he said.

“I like the idea it’s Sid James as he was such a lively character in the Carry On shows, it makes sense that he’d be like that from the other side especially showing up near the stage like that.

“It’s made me more inclined to believe in spirits and the afterlife.”

Graham was sat alone as the supernatural sight unfolded when his sister, Joan Johnstone, popped to the toilet during the interval.

By the time she returned to her seat the orbs had vanished.

Graham said: “This experience, along with watching programmes like Most Haunted, has made me more open to the idea of spirits.

“It’s a well-loved theatre and the experience didn’t have a scary feel to it.”

Sid James suffered a heart attack on stage during the opening night of comedy The Mating Season on April 26 1976 and died at the age of 63.

His spirit, along with the ghosts of two other women, are said to linger at the Edwardian theatre.

It’s believed after appearing in panto on the same stage in 1989, Les Dawson refused to perform at Sunderland Empire again after an encounter with Sid’s spirit.