A sweet young family  has managed to transform three shipping containers into an amazing and attractive little home!

From using carton paper to make cute slippers to turning 20ft containers into one of the most comfortable and beautiful homes in the world. Imagination is our only limitation.

A sweet young couple who live in Melbourne, Victoria, Australia has managed to transform three shipping containers into an amazing and attractive little home. They’ve put up something that suits both of them and their financial needs, and they are at peace in their lovely, solar-powered, and contained home. They wanted to go the “untraditional route”, and that’s exactly what they did.

Richard and his pregnant wife Amy are expecting their first child in less than two months. The cool surroundings make the home peaceful and calming. The entire land belongs to Amy’s parents, and they are only using five acres of it. The couple didn’t want to dabble in down payments, mortgages, and lifelong loans on a house. They travel quite a bit, too. Richard’s family lives in England, so they’ve spent many holidays there, not to mention their traveling for business purposes. According to them securing a big, roomy house and leaving it several times a year is a waste of space, resources, and money. They just wanted something small and compact to suit their needs, and that’s exactly what they got.

In an interview with Bryce Langston from Living Big In A Tiny House, the couple showed off their amazing home.

“We absolutely love our home,” Amy says. “We enjoy using this space.”

They spent £80,000 on everything, including the containers, the joinery, the hides, the tiling, the paneling, the solar system, and even the septic tanks. Actually, it’s a great deal altogether. The house is theirs forever.

“One thing we really wanted was a quality home and also something that’s aesthetically pleasing whenever you walk through the door,” Amy explained.

The containers are made of heavy, cold, steel. There’s no way anyone can live comfortably in them without providing some sort of thick insulation. Aside from the paneling done on the inside, the couple also covered the exterior of the container with designer panels, a weather-resistant surface which does a good job at hiding the containers. This paneling allowed for insulation both on the inside and outside of the home, essentially sandwiching it between the panels and the home. 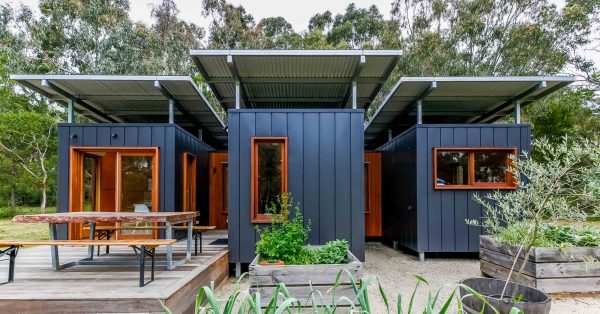 The main idea behind the house was to have the bedrooms, the living room, the kitchen, and the bathroom in different containers. The three containers are linked by connecting doorways running through either side of the outer two and both sides of the middle one.

The house is solar-powered, though they’re only living partially off the grid. A 3.75KW system powers the house for now since only two people are the occupants at this present time. They cited financial constraints as the reason why they don’t have all the panels connected. They couldn’t afford to purchase the batteries they needed, so they’re letting them sit around for future purposes.

There are floating roofs on each container which keep the house cool in warmer months. It also holds the solar panels in place. 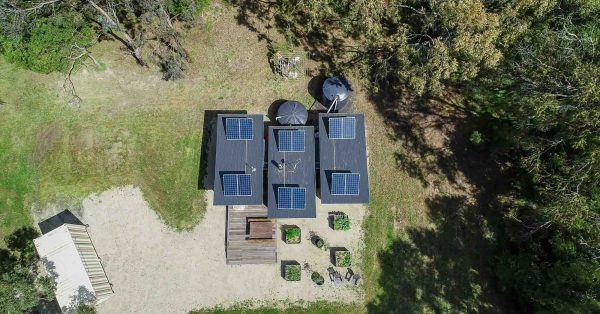 Two large storage tanks outside the house collect and store about 30,000 liters of rainwater. They initially started with 20,000, but a dry summer and autumn taught them to be more cautious with their water situation.

The walls are covered on the inside with wood panels and varnished off to a smooth, fired-clay appearance. The joinery used has zero formaldehyde and they were finished with a low VOC varnish.

For a home this small, they were sure to utilize every available space for storage. The kitchen and the bathroom are surprisingly sizeable, with drawers and racks installed into the paneling to maximize space. The queen-size bed in the master bedroom is super high, and the volume of space beneath it is a storage area. 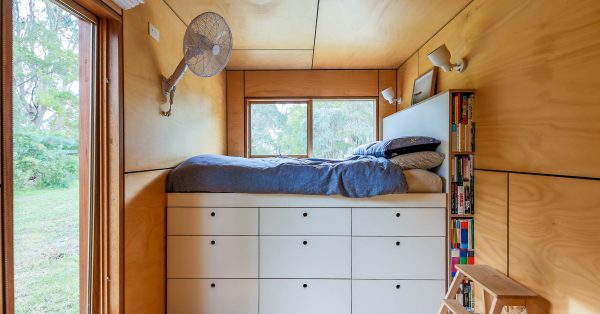 The couple has a very modern home. They wanted to save the cost of remodeling and renovating in the near future.

The most surprising thing about his tiny home is that they’ve got a six-chair dining table.

“We love having friends come over and one of the requirements was at least four,” Amy said. “We were lucky to thrift our lovely dining table out local and there’s more than enough room in here to entertain six people over for dinner or lunch.

This home is a really nice one from this young couple. 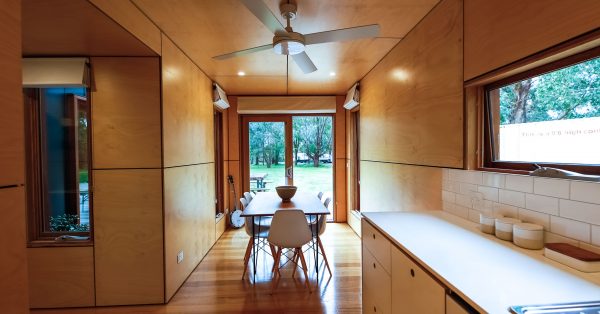 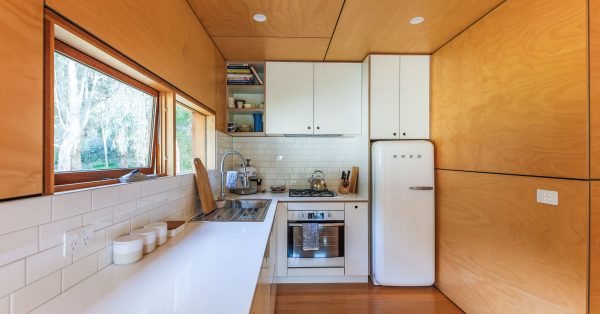 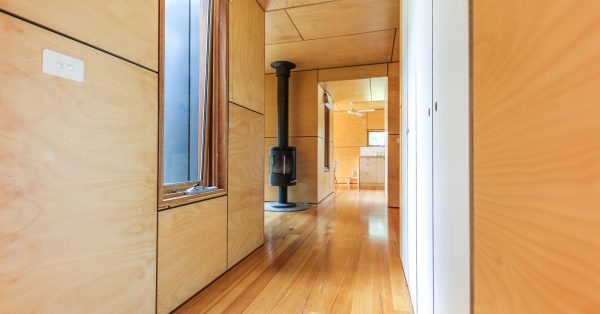 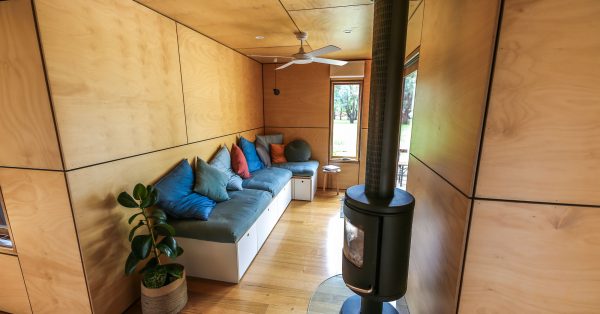 Next Story >BREAKING: Boris Loses Vote And Announces An Election In The Form Of The Fixed Te…