Yesterday, a horrific shooting occurred in an elementary school in San Bernardino, California where 3 people, including an 8-year-old student, were killed.

The police have identified the suspect as 53-year-old Cedric Anderson, who committed suicide after the shooting. 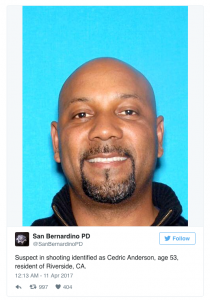 Anderson entered the school to drop something off for his estranged wife, who was Karen Elaine Smith, a 53-year-old teacher at the school.

He entered her special education, saying nothing, and opened fired with his large-caliber revolver, killing his wife. Two students standing behind Smith were also struck by the gunfire – one of them being 8-year-old Jonathan Martinez, who died later on in hospital.

The second student is a 9-year-old boy, who is currently in a stable condition at a local hospital.

The students were evacuated to a nearby high school quickly after the shooting took place.

Superintendent Dale Mason had this to say at a press conference Monday afternoon: “This is a tragic event. It’s going to take time for our heads and our hearts to heal.”

Police do not believe that this attack was against the students, but rather a murder suicide.

The students were reunited with their families Monday afternoon. Some parents had to wait hours to see their children again.

San Bernardino was also the site of the terrorist attack in 2015 that left 14 dead and 22 injured.

Donald Trump’s military order of launching missile strikes on Syria has shaken the world to its core.

In the early hours of this morning, the United States intentionally bombed a Syrian regime target in response to Syrian leader Bashar al-Assad’s horrific chemical attack on Tuesday. The alleged target is a government-controlled air base where the deadly chemical attack was launched.

Before the missiles were fired at Syria, President Donald Trump took to the stand to justify this military decision.

Trump stated that, “Assad choked out the lives of helpless men, women and children. It was a slow and brutal death for so many.”

“Tonight I ordered,” he continued, “a targeted military strike on the air field where the chemical attack was launched.”

Trump insists that this attack is a “vital, national, security interest of the United States.”

This is the first missile launch made by the U.S on Syria since the country’s civil war first began in 2011.

Though many condemn the atrocities that happened in Syria, on the day of the chemical attack, many are quick to criticize Trump for not consulting congress on this potentially game-changing decision.

Others have taken to social media, calling out Trump on his hypocrisy. 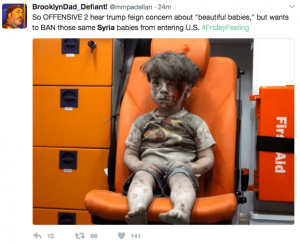 This is one of the biggest orders that Donald Trump has made during his short time as President. Many nations and people are torn by this momentous decision and only time will reveal its consequences.

Our hearts go out to the Syrian victims of the chemical attack.