Charlie Gard’s parents have revealed that the terminally ill baby has died. Charlie, who was 11 months old, suffered from a rare genetic condition that meant he spent most of his life in hospital.

His mother Connie Yates told Mail Online: ‘Our beautiful little boy has gone, we are so proud of you Charlie.’

Charlie was at the centre of a long legal battle between his parents and doctors at Great Ormond Street Hospital (GOSH).

Ms Yates and his father Chris Gard wanted to take him to the USA for experimental treatment, but medics argued it would not help.

They abandoned their case on Monday in what they described as ‘the most painful of decisions’.

In recent days, his parents launched one last legal fight, claiming they should be allowed to bring him home to die.

However, a judge ruled that Charlie would be moved to a hospice where his life support would be switched off.

He was moved to the hospice on Thursday.

In a statement, GOSH said: ‘Everyone at Great Ormond Street Hospital sends their heartfelt condolences to Charlie’s parents and loved ones at this very sad time.’ 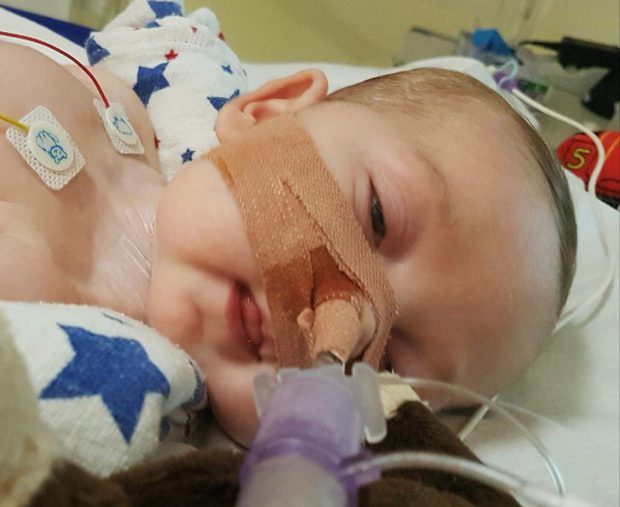 Charlie’s parents wanted to take him to the USA for treatment (Picture: PA)

Meanwhile, Prime Minister Theresa May said she is ‘deeply saddened’ by Charlie’s death and her ‘thoughts and prayers’ are with his parents.

Support for Charlie during the long-running public legal battle came from Pope Francis and Donald Trump, who both waded into the debate to offer help.

Mr Gard and Ms Yates fought legal battles at the High Court, Supreme Court and Court of Appeal, but judges ruled that efforts to continue his life should end.

The heartbroken couple have been outspoken about the courts’ decision, with Mr Gard claiming his son could have lived life as a ‘normal, healthy little boy’.

But lawyers for GOSH said Charlie’s rare illness was so severe that earlier treatment would have proved unable to save him.

He was born with a form of mitochondrial disease,which causes progressive muscle weakness and brain damage.

Charlie died a week before his first birthday, on August 4.