Donald Trump has only been president for a few hours and the White House website has already hinted that he’s planning to remove the United States key aims to tackle climate change.

The White House homepage displays six key ‘issues’ that Mr Trump is planning to address promptly. The first on the list being ‘America First Energy Plan’, which according to some sources really means ‘America’s growth over climate change’.

It says: “For too long, we’ve been held back by burdensome regulations on our energy industry. President Trump is committed to eliminating harmful and unnecessary policies such as the Climate Action Plan and the Waters of the U.S. rule. Lifting these restrictions will greatly help American workers, increasing wages by more than $30 billion over the next seven years.” 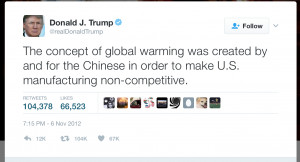 The previous climate change plan was put into place by Barack Obama in 2013 and was thought to be very popular with the general public. It was divided into 3 sections; plans to cut the carbon pollution in the US, getting the country ready for the effects of climate change and also plans to lead other countries to address global warming, reports the Independent.

What next is Trump going to change…. Let’s hope it doesn’t involve the big red button.