Mr Trump’s press secretary said it had been “the largest audience to ever see an inauguration” even though figures he cited add up to under 750,000 people.

He said the new US administration would hold the media accountable.

Mr Trump said “it looked like a million and a half people” there on Friday – with the crowd extending all the way back to the Washington Monument.

He provided no evidence and photos show that the crowd did not reach the monument.

To support the argument, his press secretary Sean Spicer outlined figures amounting to 720,000 people in the Mall, despite having asserted seconds before that “no one had numbers” for the inauguration.

He also said that the number of people taking Washington’s subway system on the day had been higher than during Mr Obama’s second inauguration in 2013.
In fact, there were 782,000 tickets that year, but 571,000 this year, the Washington-area transit authority says. 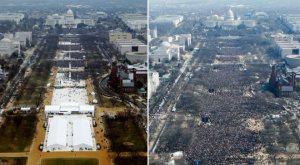 Trump’s inauguration (left) and Obama’s in 2009, viewed from the Washington Monument

Mr Spicer also said that plastic sheets had been used for the first time to cover the grass which “had the effect of highlighting areas people were not standing whereas in years past the grass eliminated this visual”. In fact, the grass was also covered in 2013.
He added that fences and metal detectors had had an impact on attendance, but this had also been denied by officials as being a factor.

The new president repeated his low opinion of the media dubbing reporters “among the most dishonest human beings on earth”. Mr Spicer vowed “to hold the press accountable”.
In their reaction, major US media outlets flatly denied the claims made by the US president and his spokesman.

< Prev StoryHow to Get UnLimited Chocolate