It was a problem beyond a plumber’s expertise.

A Western Diamondback rattlesnake wormed its way up the plumbing of a Texas home and surfaced in a family’s toilet bowl.

Nathan Hawkins, the owner of Abilene, Texas-based Big Country Snake Removal, said a young boy first found the snake slithering in the toilet on Jan. 26. He tried to flush the creature down. But he only startled it and caused the snake to come further out of the toilet.
Hawkins, who got a call from the boy’s dad, arrived in 30 minutes to find the boy’s mom had killed the snake. 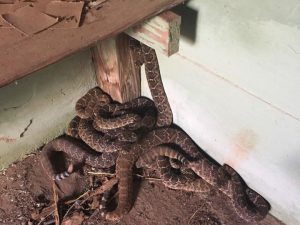 For Hawkins, it was a first to find a toilet-dwelling rattlesnake, but he wasn’t surprised it was able to find its way into the toilet bowl. Hawkins said the snake slithered into a relief pipe in the old farm house’s septic system.

But the rattlesnake in the bowl wasn’t the only one nearby. Hawkins uncovered 23 more rattlesnakes underneath the home and in its storm cellar. The majority of the snakes were adults, and many were between 4 and 5 feet long. Hawkins said he “relocated” the snakes.
The snakes are communal, Hawkins said, and during cold months will huddle together. He said they aren’t aggressive, but will bite if threatened.
The best thing to do, he said, is to leave them alone.