Six people are dead after terrorists drove a white van into pedestrians on London Bridge, then leapt out and started stabbing bystanders.

Police said there were “multiple fatalities” after three men launched the frenzied and murderous rampage. Witnesses described attackers slashing throats, faces and stomachs of their victims with 12in knives. One man told BBC news he heard them shouting “this is for Allah”.

Terrified people ran for their lives, hiding behind tables and chairs and in basements as some hurled bottles at the attackers, as staff tried to lock doors. 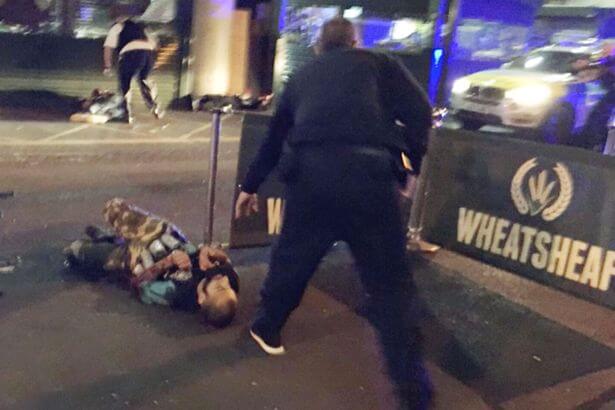 Police have confirmed that all three attackers were shot dead by armed cops. Pictures showed two suspects lying on the floor after being neutralised.

They had cannisters strapped to their chests which police later said were fake suicide vests.

London Ambulance Service have said at least 48 people were taken to six hospitals across London. One policeman is believed to be among the casualties.

One witness said she saw at least three people stabbed and their throats cut by attackers wielding 12inch-long blades as terror returned to the capital.

Witnesses told of bodies “strewn” along the road after the van caused carnage at 50mph just after 10pm. 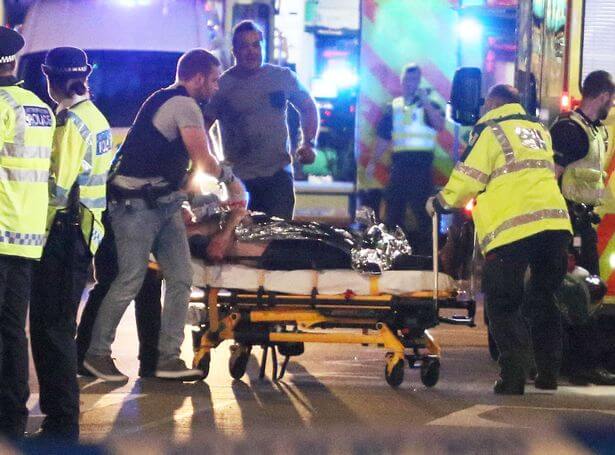 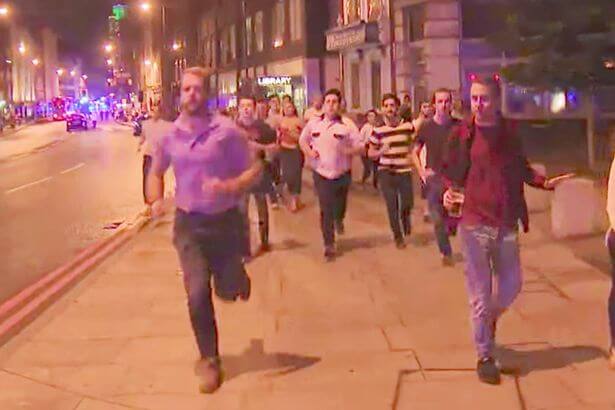 The knifemen were said to have begun “randomly stabbing people” along Borough High Street, which leads on to London Bridge, after leaping from the vehicle.

That led to police declaring a second incident at adjacent Borough Market – in the direction the attackers, described as being of Mediterranean appearance, were heading.

Witnesses said two men entered a restaurant and stabbed two people inside. Around 30 police stormed an address on the corner of Borough High Street and shouted “get down” as quick bursts of gunfire could also be heard.

An Asian man, around 5ft 6ins and in his mid-30s was arrested and had both hands tied behind his back as more than 10 cops surrounded him.

The bomb squad were on the scene with boats searching the Thames. 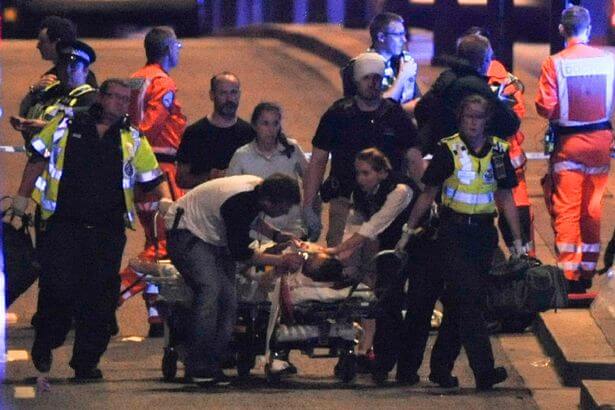 A string of witnesses told of the horror unfolding in front of them close to London Bridge rail and Tube station.

Fred Horsall, 56, an electrician from Tottenham, said: “I saw people dying in front of me, I was coming out of the station. I could hear gunfire.

“I saw two young ladies in their 20s who both died in front of me. The paramedics were working on them and then had to give up and they were covered over.

Find Out More About This Incident Here