A BBC2 documentary that was filmed at St Mary’s Hospital, Paddington, at the exact moment that the Westminster Bridge terror attack unfolded, shows the last few moments of Khalid Masood, who orchestrated the terrorist incident.

The footage that is due to be aired next week, is part of BBC2’s series ‘Hospital’. In it, viewers will see the terrorist being rushed into the accident and emergency department guarded by two armed officers. Masood is one of the first casualties to arrive at the hospital.

He is wheeled in on a trolley partially dressed, before being pronounced dead by medical staff. His body is then taken to a makeshift mortuary where his body is guarded by armed officers.

A few more victims of the incident start to arrive, including French students Yann, 18, and Victor, 16, who were on the final day of a trip to London from Brittany, France.

One of the students has to have his scalp sewn back together, while another suffered a collapsed lung. Another victim called Stephen, who was celebrating his 40th birthday when he got caught up in the attack, has to have surgery to save his leg. 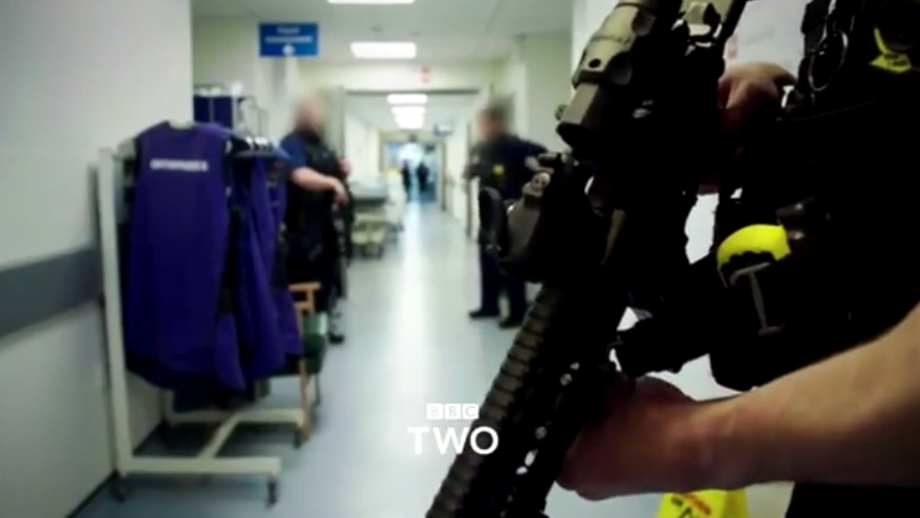 The documentary shows armed cops in the hospital. IMAGE: BBC

Simon Dickson of programme maker Label1, said of the decision to include the attacker: “He’s part of the story, and his appearance in the film is as you see it.

“It’s brief, but his arrival is a key part of the day, and that is fully reflected in the way that scene is handled.”

Masood’s family were not consulted about showing him, and his face is blurred out in the footage.

BBC Two controller Patrick Holland said: “The decision was made to treat him in exactly the same way, from the point of view of the hospital.

“That’s where we’re seeing him, that’s where the audience is being allowed to see this incident unfold, he’s the first casualty that comes to the hospital and we followed the same protocol that we do with any other patient which is that if they don’t consent, you blur them.”