A terrified family have been forced to lock a ‘possessed’ doll in their shed after claiming it’s haunted their home and even scratched their bodies during the night.

Debbie Merrick, 50, purchased the doll as part of a set-of-three from a charity shop just three weeks ago.

Since then, Debbie and her husband Cameron, also 50, have seen their lives rocked by the creepy toy – even being forced to bring in a medium to investigate.

Debbie also claims Cameron woke one morning with unexplained scratches on his right leg a week after the doll’s arrival at their home.

When a medium friend warned her that the doll she had purchased had ‘something in it’ later that weekend, Debbie says she put two and two together – and fearfully bundled it into a box in the shed.

And since discovering the doll has ‘moved’ and apparently removed its necklace independently while in the box, Debbie has put the doll up for sale on eBay, refusing to touch it ever again.

Debbie, from Kings Lynn, Norfolk, said: “I don’t know why I decided to buy the dolls. It was a bit strange, but at the time I didn’t think much about it. Even that’s unusual.

“They were really cheap, they were only £5 I think, and I thought they would probably be worth quite a bit of money.

“It’s really just the one doll with the white dress I don’t like. I didn’t particularly even like touching that one when I bought it. The other two I don’t mind as much.”

“The smoke alarms keep going off, and one night I heard the floorboards creaking and thought it might have been my daughter Holly up, but when I checked on her she was asleep. 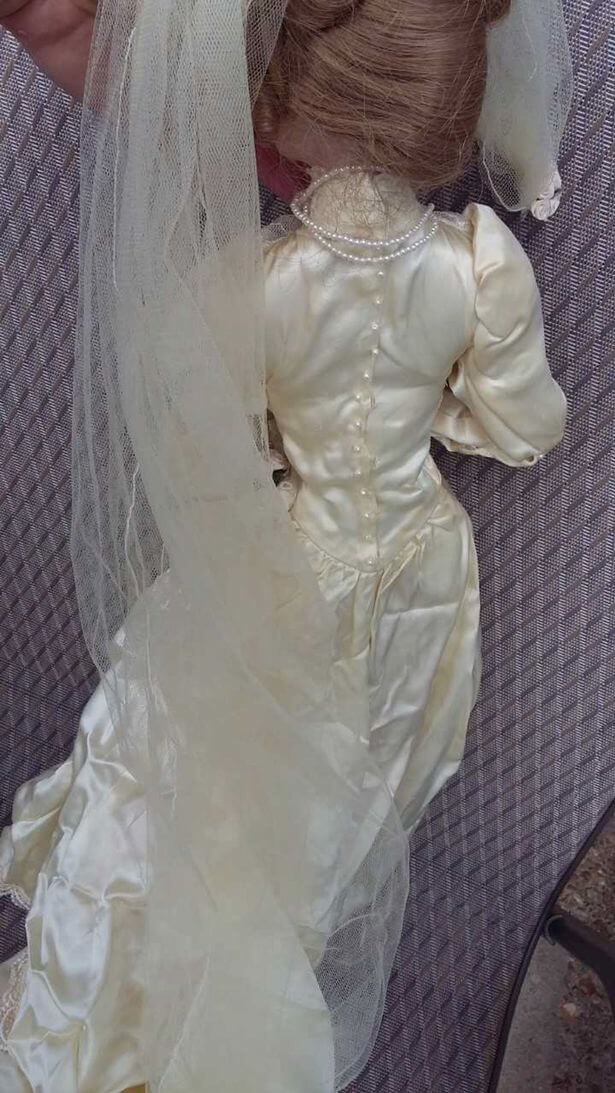 “Then one morning my husband said to me, ‘I’ve got scratches all over my legs’.

“It definitely hadn’t happened before. They looked a bit like cat scratches and were sore.

“My husband is a complete non-believer. He’s still trying to come up with an explanation.

“I’ve had a nightmare about a doll dragging itself along the floor towards me.”

Debbie says the dastardly doll was locked away in the shed after a medium friend freaked out about staying in the same house as it, claiming it had something inside it.

But just two days later, when she was searching the shed for another item, she was terrified to see the doll appear to have taken off its necklace.

Debbie, who says she has had paranormal experiences since the age of five including seeing a ghost, said: “When I brought the dolls through for them to take a look she said, ‘get it out, it’s got something in it.’

“She refused to sleep in the same house as it, she was freaking out about it.

“I put it in the shed in a box, and placed things on top of it.

“Then the other day I had to go into the shed to get something, and when I looked in the box the necklace on the doll was completely off and the doll was in a different position, I’m sure.

“When I’d packed it away I’d made sure the necklace was wrapped around its neck about four times.

“I was quite scared of it to be honest. I just kept thinking ‘how?’

And the necklace incident was the last straw for spooked Debbie, who proceeded to stick the doll on eBay for £25 in hope of getting rid of it.

Debbie said: “I took some pictures of it because I wanted to put it on eBay, then I left it. I even struggled to upload the pictures to eBay, it was really strange, that had never happened before.

“I don’t want to go back into the shed now. I won’t touch it again, it can get picked up if it’s bought, and if we need to post it my husband can package it up.

“Some people on social media have told me it has something in it, some said it doesn’t.

“If it doesn’t sell I’ll give it to a charity shop.

“It’s the women in my family who experience paranormal things. In my last house there was definitely something there.

“I think my dad who died recently might be trying to get in touch.

“There could be something in the doll. I believe things can attach to items – that’s why I have no old furniture in my house.”