A turtle was found tied to a tree with a chain after its owners drilled a hole in its shell so that they could go on holiday.

A large ring was put through the back of the shell and a 23ft wire was attached to it.

The yellow-bellied slider, a land and water turtle native to the south-eastern United States, was secured this way so its owner could go on holiday.

On Saturday 4pm, a woman from the local garden plot holder’s association called the Dortmund fire brigade after she saw the turtle laying on its back in the garden in Germany.

The wire had become entangled in blackberry bushes as the turtle tried to cool down on the ground, because a water hole or pond was not available, even though it is a must for the turtle species. 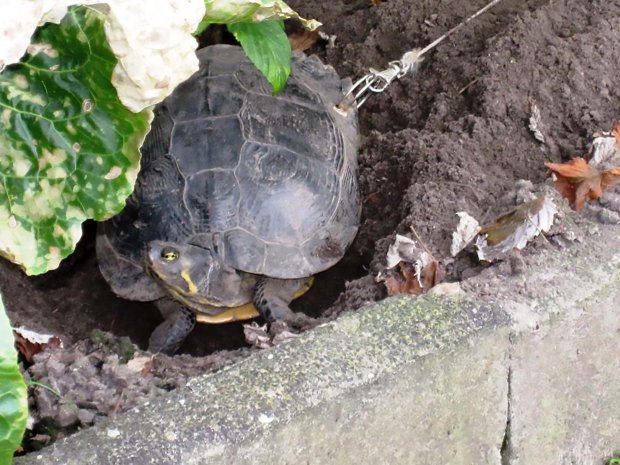 A turtle was found trying to find somewhere to cool off after a wire it was attached to got tangled in some bushes (Picture: CEN)

Arne Stenzel, 50, and his wife Ute, 48, of local animal rescue organisation ‘Ark 90’ were the first to arrive on the scene after they were asked by the firefighters for help.

Arne Stenzel said: ‘I was shocked. You also cannot secure a dog to a wire and just drive away.’

Together with the veterinary office of the city of Dortmund they managed to free the unfortunate animal and gave it to a local shelter.

Max Schauerte, the deputy head of the local animal shelter, said: ‘The animal must have felt agonising pain because the shell is by no means just a shell, but similar to human skin.’

They removed the key ring from its shell and took care of the wound.

When the owner of the turtle returns from holiday, they can expect a criminal charge for animal cruelty.